Here’s an introduction to my husband Ken’s side of the family.  Ken and his sister Kay grew up in Dalton, Ohio, where his father, Paul Badertscher, taught at the local high school.  We’ll be talking about their mother’s food, but today Kay remembers another famous cook in their family and a vintage family restaurant. 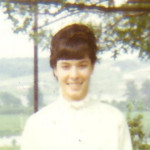 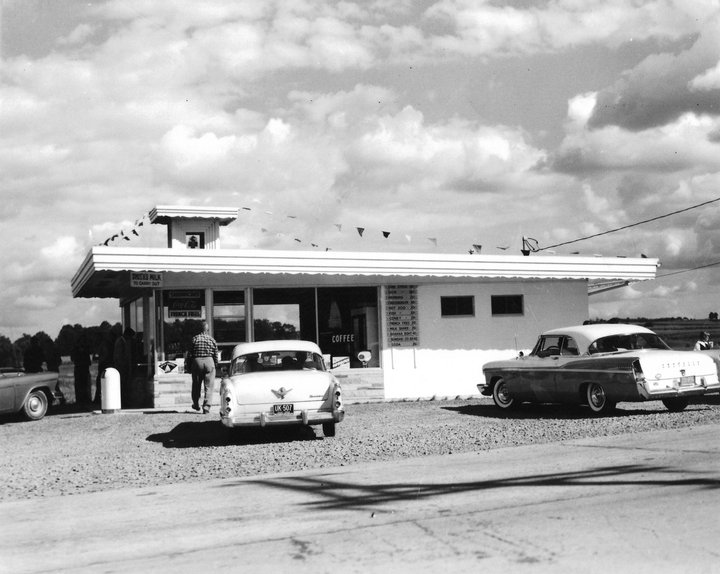 Note: Richard J. “Dick” Kohler (1924-2008) owner of the vintage family restaurant, was the half brother of  Agnes Baer Badertscher who was the mother of Kenneth Ross Badertscher and Kay Badertscher Bass.

Curly fries, Nightmare Sandwiches, Coney Slaw Dogs, Banana Milkshakes…ah the memories and mouth watering sampling of the Dalton Dari-ette on Route 30 in Ohio. My uncle, Richard “Dick” Kohler, was the owner and in 1968 I was a very nervous 16 year old “Dairy Dolly”, learning the ropes. 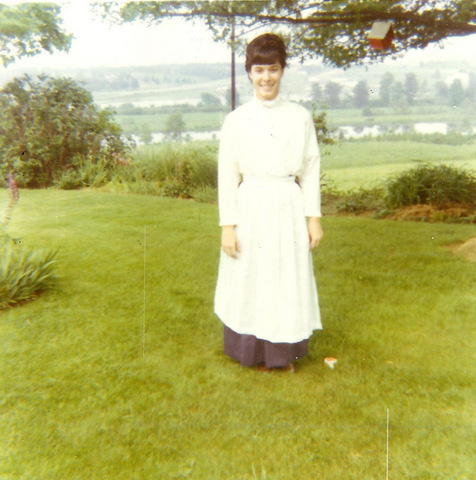 How could I master the trick of making a frozen custard cone with a curly tip or a root beer float that did not react like a volcano when the soda was added to the frozen custard? Only once did I have the milkshake machine spindle cut through the paper cup, spewing milk, frozen custard and syrup all over my uniform and the floor. Thankfully Uncle Dick was a very patient and forgiving boss! 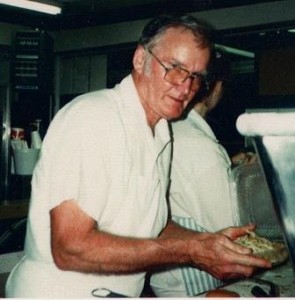 Although it was family-operated business, Uncle Dick was the true nucleus of the Dari-ette operation. Early in the mornings he would drive his pickup truck to the little white cinder block and brick building on the outskirts of Dalton, Ohio along U.S. Route 30. He would set up his apple peeler and start peeling potatoes, standing for several hours at a time to shape his curly french fries. Then a quick frying period began the cooking process of those marvelous potato delights. Many evenings after closing time he would scour the grill, mop the floor, clean the restrooms and burn the trash.

Many folks did not realize that as a young boy growing up on a small dairy farm during the Great Depression, Uncle Dick stepped on a pitch fork causing a life-long limp. He always seemed to maintain a quick smile and hearty laugh in spite of pain that I am certain he often endured from those long hours on his feet.

My mother recalled many Sunday afternoons in their family home during the Great Depression when the dishes had been washed and the kitchen cleaned, her brother Dick could be found at the stove whipping up a batch of candy. Mother said he usually was very successful making delicious confections with very few ingredients. She only lamented the fact that he often did not clean the dirty dishes after he was finished, leaving that chore for his mother or sisters. She theorized those times in the kitchen laid the foundation for later years when Uncle Dick switched from dairy farming to dairy delights at the Dari-ette. 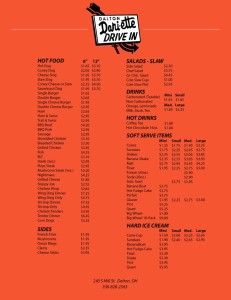 The Dari-ette had a large “walk in” refrigeration vault in the center of the building that was the only cooled area of the building for years. The summers could be quite unpleasant inside that buidling, with so many refrigeration units, grill and fryer vying for top output of heat. One especially hot day, no one could locate Uncle Dick, although his familiar pickup truck was in the rear parking lot. A final search revealed his secret retreat: the “walk in”, where he was calmly reading the newspaper while seated, cool as a cucumber, on an empty, upturned plastic container. As I recall, it was only a year or two later when he agreed to install window air conditioning units, much to the joy of his employees.

I remember the 1969 night Neil Armstrong walked on the moon. Uncle Dick rigged a small black and white portable TV set on top of the frozen custard machines enabling those of us working that evening to witness an historic event.

Banana Milkshakes were made with real bananas and Uncle Dick added a “secret ingredient” to the hot fudge sauce that made it downright addictive. There was  a special flavor of frozen custard featured each week. Some of the more popular ones were peanut butter, peach, mint, and maple walnut. These were usually coupled with chocolate frozen custard to make a “twist” cone, combining both flavors. We even made ice cream sandwiches, layering the frozen custard between two chocolate cookies.

Foot long Coney Slaw Dogs were [and still are] a popular item. The 12-inch hot dogs were steamed, then inserted into a warm bun, topped with delicious Coney Sauce (aka mild chili sauce) and a vinegar-based coleslaw. The slaw was a recipe Uncle Dick made in large glass condiment jars and stored in the refrigerator. The recipe is actually a secret, but the one below is very similar. 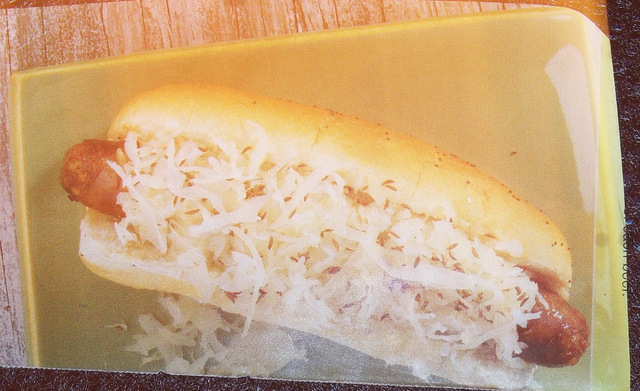 Mix well, store in refrigerator. Keeps for as long as a month. 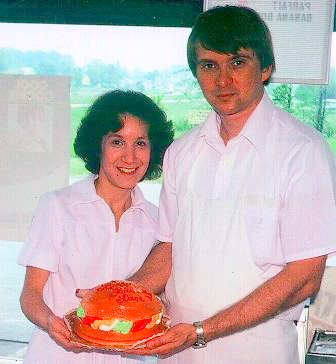 The “Nightmare” sandwich was an original idea of Uncle Dick’s and it requires a very hearty appetite to finish one. It needed an extra large bun to hold all of the meat and extra ingredients. Sorry, dear reader, you’ll simply have to go to the Dari-ette to sample one to find out what those ingredients are. However, if your curiosity gets the better of you, here’s a picture from the Dari-Ette’s web page– a photo of my cousin Dave and wife, Gilda holding a Nightmare sandwich.

Uncle Dick’s son, Dave, once remarked while working frantically at the grill, “Doesn’t anyone cook any longer on Sunday evenings?” No, Dave, not in Dalton, Ohio!

[Note: The Dalton Dari-ette is now owned by Dick’s son-in-law and daughter, after being owned for many years by son Dave, which means it is truly a vintage family restaurant–since it has been in the family for almost all of 53 years.]