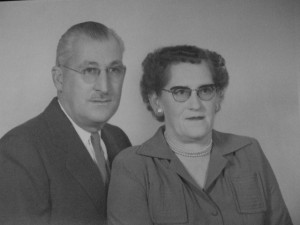 Aunt Sarah was always in motion.  Her house was spotless, clothes ironed just so. When there was no more housework or cooking to be done, her hands were busy creating things–crocheting doilies or throw pillow covers, making sock dolls, embroidering pillow cases, making clothes and piecing quilts.

I think of Aunt Sarah every time I get out my hand-held electric mixer. She gave me one for a wedding present and it lasted about 40 years before I had to replace it, so she was in the kitchen with me for a lot of years.  (Of course the mixer was from Bill, too, but I’m pretty sure he didn’t have much to do with the choice, although at the time he was working at the hardware store where she would have purchased it in Killbuck).

I am intrigued by this flapper era picture of Aunt Sarah and Uncle Bill (William J. Anderson, my mother’s brother, 1905-1978). They look like they would have a lot of fun, didn’t they? 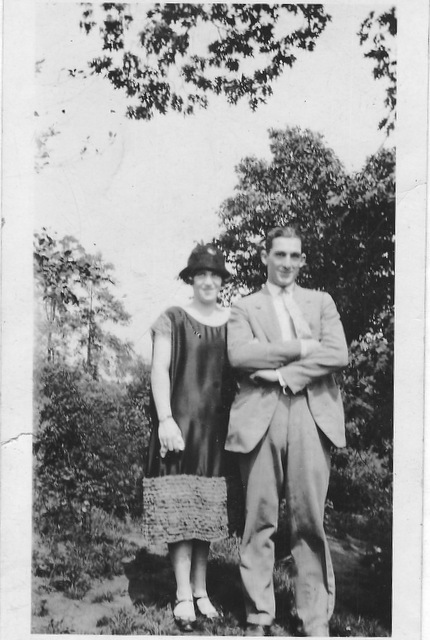 Sarah and Bill married in 1924. She was 21, and although he had turned 19 just the day before they applied for the license, he stated that he was also 21. These are probably wedding pictures. 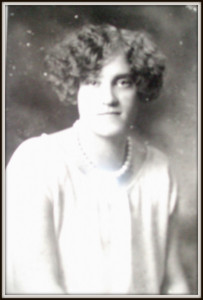 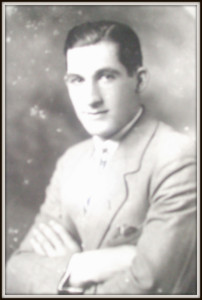 Bill and Sarah had one child, Robert J. Anderson, whom Sarah doted on. (I’ll talk more about him in an article about family in World War II).

Sarah’s domestic skills became the family income provider in at least one point in her young married life when she and Uncle Bill ran a laundry business in Killbuck, Ohio. And in checking census records, I notice that she and Bill took in borders early in their life together, when they were living in Dayton Ohio. One more lady in the family who had rented out rooms.

The one thing that Sarah Anderson liked to do even more than domestic arts was talk.  Wind her up and of she would go in a fast-paced, high-pitched voice, filling you in on what had happened to everyone in the town since last you met.

I have a get well card that Sarah sent to my mother.  She added a note filling the inside and back of the card in her neat, small, round script.

She started with the usual concern for the patient and good wishes. But then she veered off the task of cheering up Harriette and recited all the ills–preferably fatal–that had befallen mutual acquaintances.  Anyone who did not know Aunt Sarah might have wound up depressed.  Mother probably got a good laugh from the recital of woes.

Today I’m making Aunt Sarah’s Cherry Pudding, the dessert she had waiting for Ken and me the last time we visited her in Killbuck. When I adapt her recipe I reduce the sugar. Aunt Sarah loved sugar. So before I share the recipe, here’s an Aunt Sarah memory from my sister, Paula Kaser Price.

Aunt Sara was a hard working, kind, long-winded soul. I often heard it said of her that she could talk the ears off a mule. Uncle Bill, her husband, would turned off his hearing aid to get some quite. She knew it and just kept talking. I witnessed this phenomenon often.

However, I think every one loved Aunt Sara and appreciated her willingness to work hard at whatever she did. I know I did. In hindsight I wonder if her ability to talk might have been the result of her consumption of great amounts of sugar.

One hot summer day my Grandmother, Mother cousin Debby, Aunt Sara and I were gathered in Grandma’s kitchen for lunch. I don’t remember what we had to eat but knowing Grandma I imagine some delicious cold meat on home made bread (lots of mayonnaise) cucumbers and pie. I do remember that the grownups were drinking iced tea and us kids had milk.

My grandmother, being diabetic, put a few drops of saccharine in her tea all the time complaining it just didn’t taste like sugar, what a sacrifice she was making and maybe it was all hooey anyway, knowing full well she would eat pie for dessert.

Aunt Sara, chattering away in her usual manner added spoon after spoon full of sugar to her tea until there was a little white tornado of sugar in her glass.

For a second she stopped and looked at her tea. “Vera, I think there is something wrong with your sugar. It won’t dissolve.”

Grandma responded indignantly, “ Oh for God sake Sara, you just put too much in.”

At last the glass couldn’t take it any longer. The bottom broke out and tea went everywhere.

We all jumped up except my Mother who calmly said, “Well I guess that will cool thing off a bit” 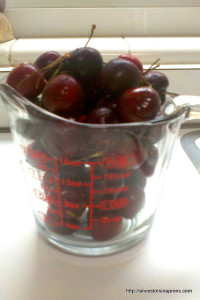 There are cobblers, and slumps, and crisps and Brown Bettys, but Aunt Sarah called her dessert a pudding. She probably made it with the bright red slightly sour cherries that I remember growing on trees around Killbuck, but I used Bing Cherries, which are sweeter. Whatever kind of cherries you use, adjust the sugar, particularly if you do not have Aunt Sarah’s sweet tooth.

Aunt Sarah’s Cherry Slump
Recipe Type: dessert
Cuisine: American
Author: Vera Marie Badertscher
Sarah Anderson made cherry slump with a whole lot of sugar.
Ingredients
Instructions
Notes
I have enclosed my additions in parentheses. You have to use your own judgement as to the amount of sugar, based on the sweetness of the cherries, but with Bing cherries, 1/2 cup in the cherries is enough, and I cut the sugar in the batter to 1/2 cup as well. The 2 cups of water seems excessive and leaves a very runny fruit “dressing”. I reduced the water and added cornstarch to thicken it. This is most similar to recipes I have seen for cobbler, except that cobblers generally put the dough on top.
3.2.1251