I tried a few weeks ago to explain to some young women (not children– but young enough not to remember the landing of men on the moon) what an incredibly mind-blowing event that was.

Like all the BIG THINGS that we look back on as life-altering, the landing on the moon was the latest in incremental steps that we had been watching all along. So at the time, we don’t fully realize how it would affect us.

But this was different. One month we were looking at the full moon and saying to our kids–there’s the man on the moon. We were thinking of the moon as a mystical and romantic symbol of lunacy and love. The next month we were looking at the moon and trying to grasp the reality that a human being had left footsteps across the surface. No matter how matter-of- fact and scientific and logical a person you were–a part of you still felt the gauzy charm of a full moon. An atavistic urge to howl–or swoon until 1969.

After July 20, 1969 you would never feel entirely the same when looking at the moon. That was the day three American men reached the moon, and two were privileged to walk on it. Neil Armstrong and Buzz Aldrin took steps on the moon, while Mike Conrad made sure they’d have a ride home by manning the spacecraft.

That July, we were in San Diego on a summer jaunt to the beach, and our scheduled return was on July 20. We watched astronauts on the motel television set. On the way home, we had the car radio tuned to listen to reports, and when we got home, hurriedly unpacked the car and settled in front of the TV to watch the actual landing which happened at about 8:00 p.m. Arizona Time. (This picture of our boys watching TV is actually from a couple years earlier, but not much had changed in the mid-century modern house in Scottsdale, Arizona.)

We listened to Walter Cronkite breathlessly report each movement of the astronauts, the ship and the command center. We recorded the coverage of the moon landing for hours, including the historic phone call from President Nixon to the astronauts, but the tape ran out just before Neil Armstrong stepped out of the capsule to put take the first small step on the moon. We photographed the boys watching the TV, and the TV show itself. Those photos or Super Eight films are stored away in a box with hundreds of other old photos.

Here’s President Nixon’s conversation, now readily available on the Internet, as are all the other moments we had captured..or not.

How this event changed deep feelings inside us is hard to explain. The other thing that is hard to understand from the perspective of the 21st century is how we adored the astronauts. We did not have to have anything to do with the space program to feel a deep sense of pride. Those guys (and later we learned–gals, too) were part of our tribe. And they were the best of us. They were heroes. We knew their names, followed their lives the way people hang on the details of the romance of Harry and Meghan or the new Royal babies that pose on the steps of a palace.

Since we come from Ohio, we were particularly proud. Now Ohio was the home of not only eight Presidents, but also the First Man to Orbit the Earth–John Glenn. AND NOW, ladies and gentlemen–Ohio was also the home of the First Man to Step on the Moon–Neil Armstrong. The reflected glory was almost too much to bear.

Our kids played with miniature astronauts and Mattel’s Major Matt Mason and his miniature space stations and miniature moon rovers and wore t-shirts with astronaut pictures and drang Tang for breakfast and coveted astronaut ice cream. Stores sold astronaut pens that would write in any position, in case we became weightless while writing. The astronauts wore seatbelts, so we religiously buckled ours.

But all these effects of man’s landing on the moon pales beside the visceral change inside of us each time we look at the moon. The moon had changed. And so had we. 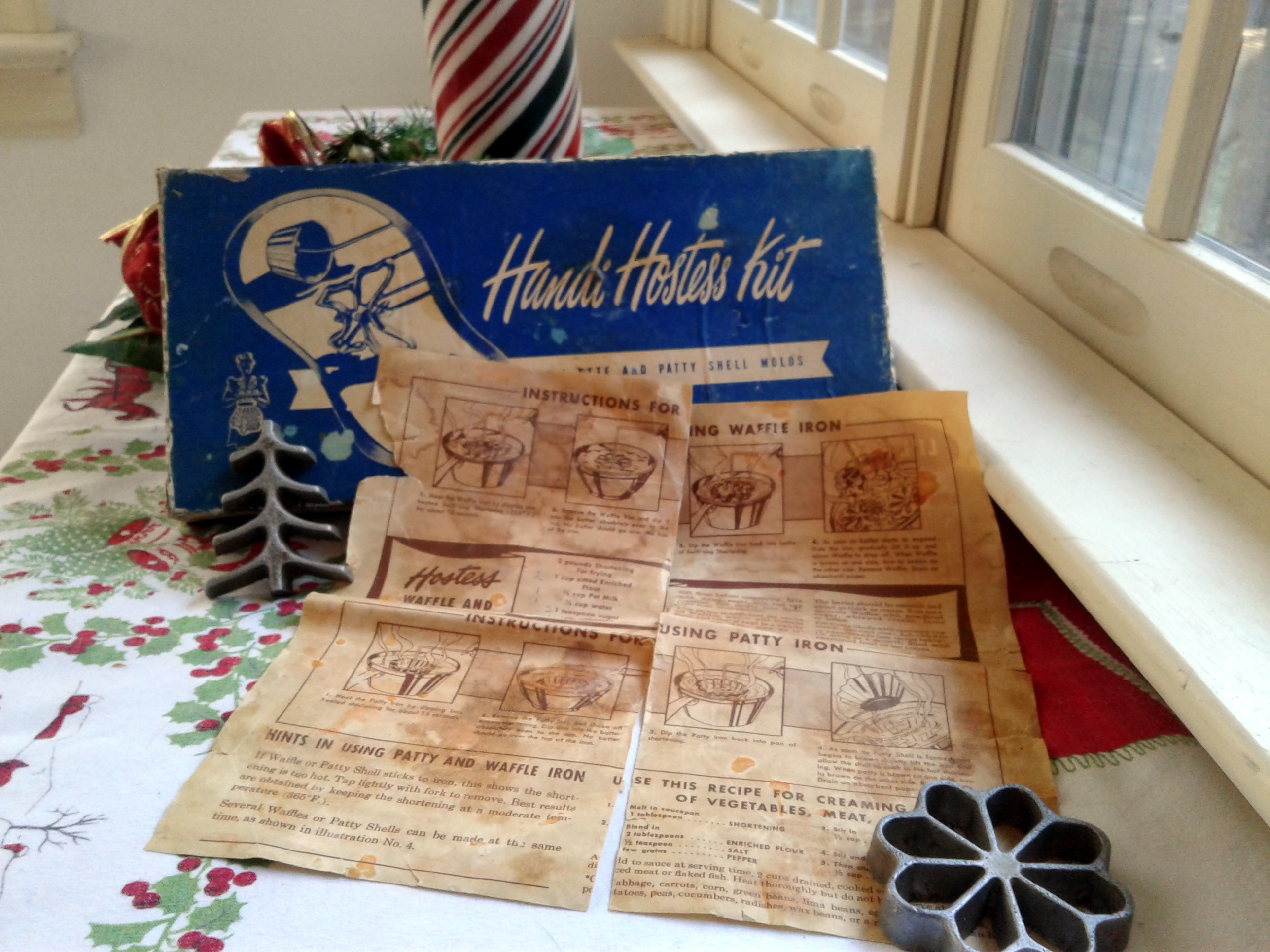 When my sister, Paula Kaser Price, inherited our mother’s waffle irons and the oil-stained recipe , she also inherited memories and tradition. Paula’s story gives us a  great example of how donning an apron can lead us back to our memories of those family members long gone. Besides traveling back in time, the story travels from Hilliard, Ohio to Scottsdale Arizona to her home today in Virginia.

UPDATE: Paula adds, “It is a team effort as one cook frys the other dusts each cookie with powdered sugar. They are delicate so the rule is if any break the cooks must eat them immediately.”  And what a shame that would be!

A Note From My Sister, Paula Kaser Price

In later years Mom and I spent  a day making waffle iron cookies. The boys were sent away and we started cookin’. We had a wonderful time especially when the “boys” (Dad, Wayne, Eric and Aaron) showed up and gobbled them up getting powered sugar everywhere. Several dozen cookies were carefully hidden away before their arrival.

Paul and I carry on the tradition spending a day making them then distributing waffle iron cookies to friends. Still use the stained recipe paper with Mom’s handwritten notes.

Because each cookie is made individually, given time to dry then sprinkled with powdered sugar, it is a time consuming and messy project. We always made at least a double batch, many times a double double batch. Mom wrote the doubled amounts on the recipe. The recipe came with the box of irons that are  in the shape of a snow flake and a Christmas tree. 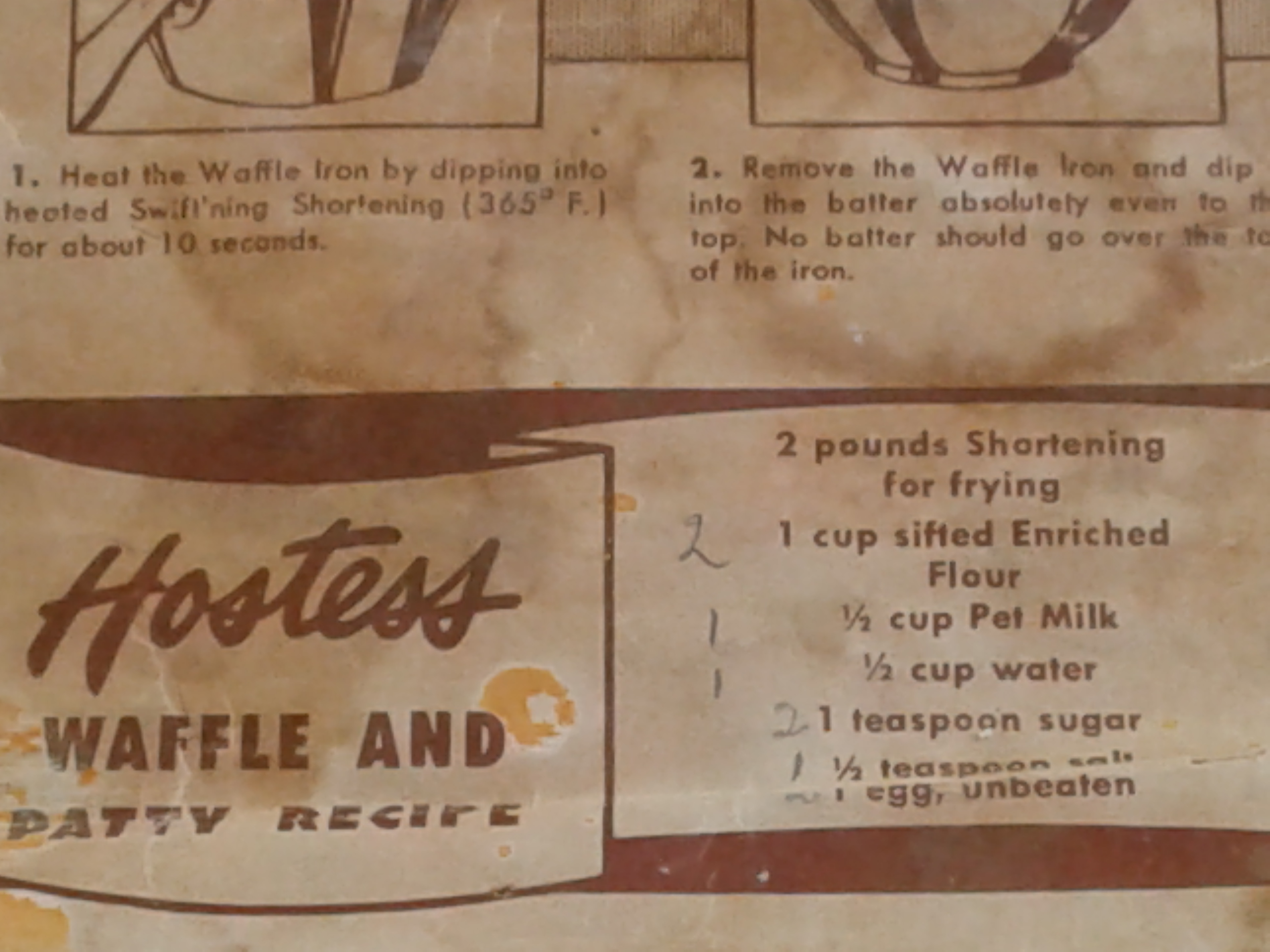 The past several years, because the recipe paper is torn in half and so oil soaked as to be difficult to read, I have thought I should rewrite it on clean paper. Then I reject the idea because using that recipe paper with Mom’s calculations is like having her spirit there watching over Paul and me and joining in with our fun listening to Christmas music, laughing, getting powdered sugar everywhere, anticipating the joy our labor will bring and the happy exhaustion at the end of the day. 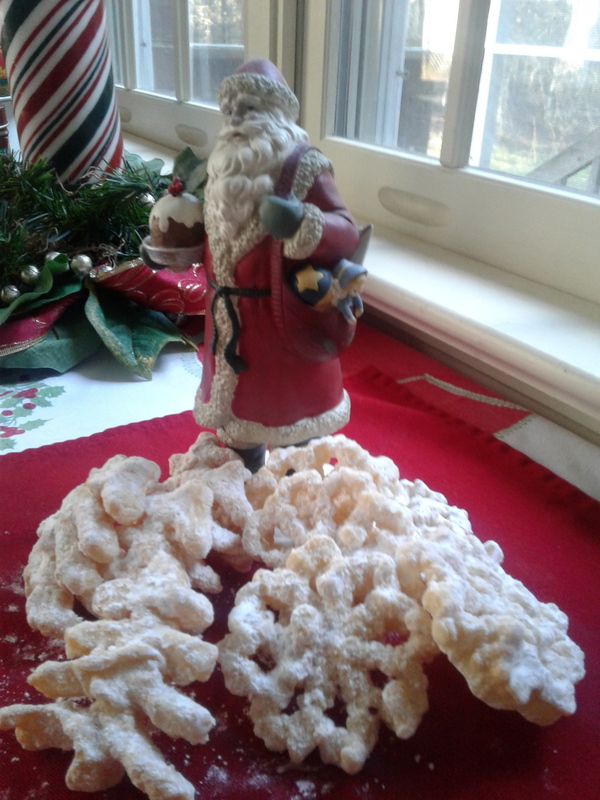 Sorry they don’t ship well. Also sorry I wondered down memory lane. Oh well, it is that time of year.

PS. Do you recognize the table cloth under the waffle box? It was always on the Christmas dining table in Hilliard. I think I remember being with Mom when she bought it at Lazarus [Department Store in Columbus OH].  Unfortunately now I can only use it folded in half as there is an ever growing hole on one side. 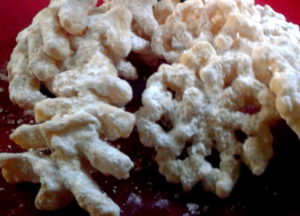 A reader asks about the term “fluffing the flour”. Here’s my source.  I suggest this alternate because I realize to younger cooks, the flour sifter is a relic of the past.  Sifting is no longer “a thing.”  Do you use a flour sifter? 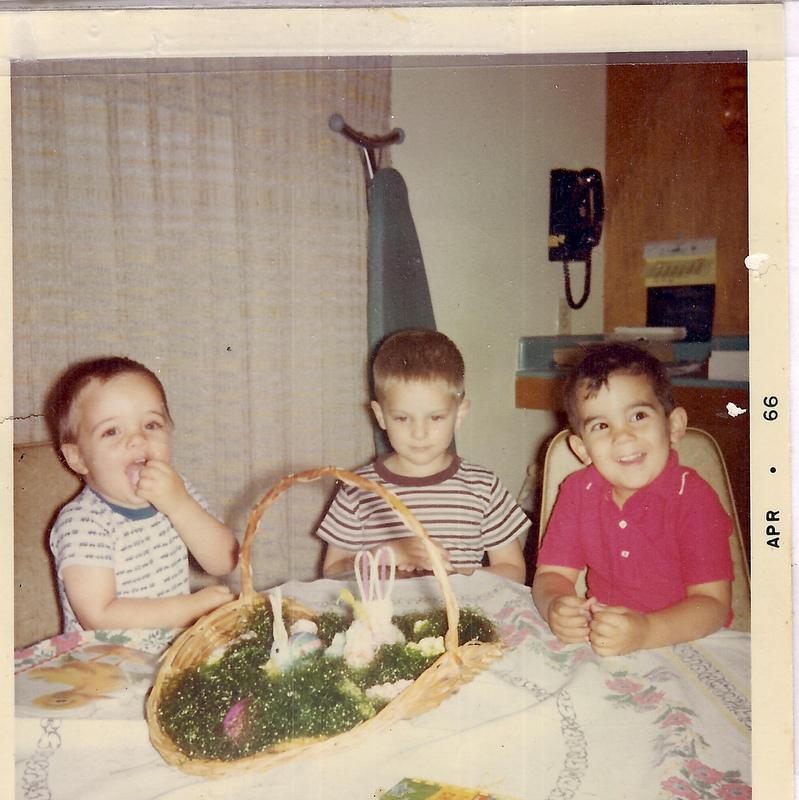 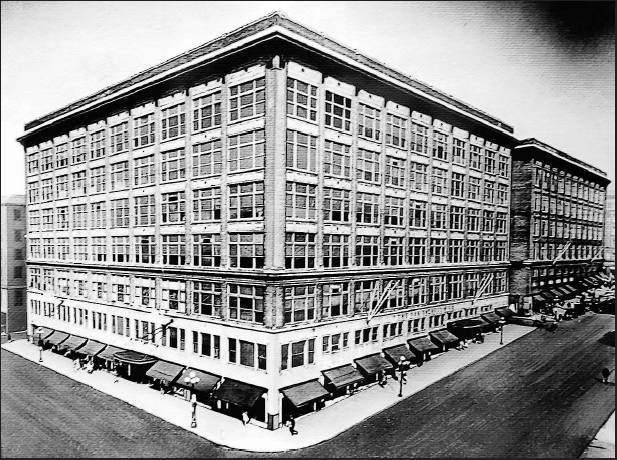