Today marks 78 years since my parents were married–June 9, 1938–a special day.

My sister and Brother are in Arizona for a reunion. They suggested we meet on June 9th, since that was the wedding date of Paul and Harriette V. Anderson Kaser. As I wrote in an earlier post about their courtship, the Ninth of the Month was always a special day for them, since it was the date in 1933 that they had their first official date. 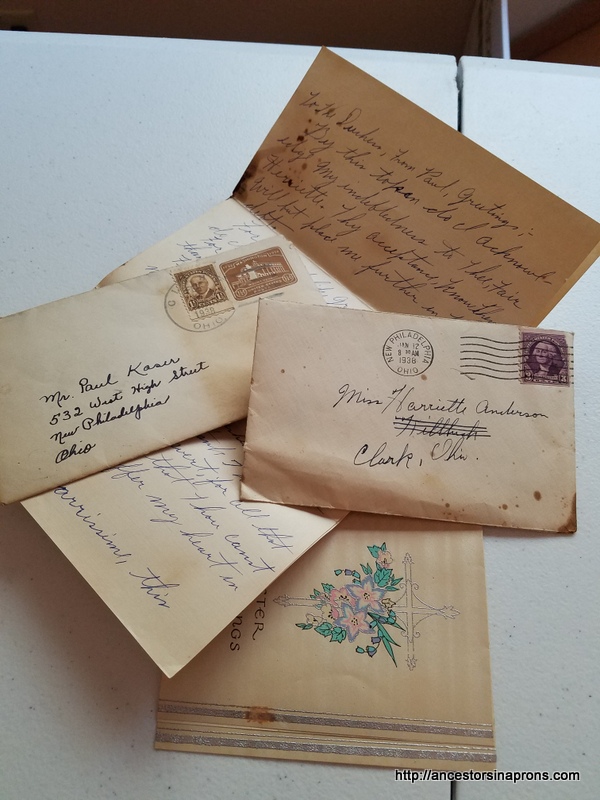 I am looking at letters from 1938–the year they were married.  As with most of the time during their long courtship (1933-1938), they were separated during the week and met on weekends.  Unfortunately, the letters that survive rarely include both sides of the conversation. I have almost daily letters from Dad during 1935, when they had just started dating, and not very many of his from 1938, although Mother’s letters indicate that he must still have been writing very regularly.

By 1938, Dad had landed that permanent job that qualified him (in their eyes, if not yet her parents) to marry her. He had moved into an apartment in New Philadelphia, Ohio where he worked for the federal Weather Bureau.  She was teaching school in the tiny town of Clark, Ohio and sometimes living with her sister Rhema Fair and Rhema’s husband Earl, but other times spending a night or two with her parents, Guy and Vera Anderson in nearby Killbuck, Ohio.

I have edited the letters slightly and removed the most personal (and mushy) bits.

Since she had a car and he did not, she drove to New Philadelphia each weekend, or he borrowed her car. In this letter in December 1937, it sounds like he may have gotten back late, and reflects other problems.

Well I went down to the office as soon as I arrived and they were very nice about everything so that’s all fixed. The only bad thing they let one of the other fellows drive my truck today and hes kind of hard on trucks and I don’t like that very well.

Had any sign as to how things are going to go over there this week. I hope they cool off now. {probably her parents, who did not want her to marry him.}I see in the New Phila {Philadelphia} paper where a Tusc {Tuscarawas} county teacher put under a peace bond. May be that’s what you ought to do. At least you aren’t the only teacher who has trouble with the board.

I called Mbg. {Millersburg} just now and Keith {his brother} is still coming along fairly good. I sure hope nothing sets in.

Mother told me that when she told her parents she was going to marry Paul, they didn’t believe it, and “when Paul went to talk to them, Vera (Harriette’s mother) was furious.” In later years, they became reconciled and my grandmother praised my father as being as good to her as her own sons.

The reference to the school board is because the Clark, Ohio school board continued to hold back teacher’s pay, (it was the tail end of the Great Depression after all)  a problem that Mother returns to frequently in her letters.

Paul worries about his brother, who has to have major surgery. Their father had died after surgery for a hernia.

Mother wrote letters like journal entries, recording her day’s activities and her feelings. One letter was being written on the 10th March, 1938.

Please don’t think I forgot what day yesterday was for I honestly didn’t. but last night I had such a headache I came home before P. T. A. was over and went straight to bed {Harriette suffered from migraine headaches all her life.} but dear I never forget the ninth and never will in fact it will even be more important as time goes on. Did you wonder what we would be doing on our next ninth? {June 9th when they would be married} I did. And you know what I decided.

Tomorrow evening we take the B. B. [basketball] boys to Fisher’s Restaurant and Thursday we go up to Bert Geauques for super and Friday night I am coming over to New Philadelphia, or am I? We could come back and then you could drive back Saturday, or is that too much. Just as you say.

She signed the letter “Duchess”. I explained Dad’s pet name for Mother in that earlier post, Love Letters and the Course  of True Love.

She returns to the subject of the Ninth in May, when, despite the fact her wedding was only two weeks away, she was on a bus trip through New York and New England and into Canada with students and other teachers.

Mother on a Road Trip

This is the first night that I have stayed in the bus but the cabins are so terrible and cost .75 per person that I preferred to sleep in the bus with the women. Helen and Mellanie to be smart wouldn’t do it. We have gone only 721 miles, but have had a grand time and have seen a great deal. Today we were at Thousand Islands.

Mr. and Mrs. Bechtol are lovely. She popped corn tonight and when anyone fixes corn they are swell. We are going thru Vermont and New Hamp. Then for home. This afternoon I had a case of homesickness but stopped it quickly but I do have a lot to tell you. And I will always be happy after the ninth {June 9 when they are getting married}. I don’t think we will get home before Monday or Tuesday, but I will {?} all when ever we do.

I love you dearly,

My Dad was a great reader, and in later years my Mother said one of the works he was introduced to by his friend Delmar Alderman was The Lady of the Lake by Sir Walter Scott. He must have been under Scott’s Arthurian Romance spell when he wrote this one!

To the Duchess, From Paul, Greetings

By this token do I acknowledge My indebtedness to Thee, Fair Harriette. Thy acceptance, know then, Will but place me further in Thy debt.

For Friendship, graciously bestowed, do I thank Thee.

For My Mind, awakened to the good meditation, thank Thee.

For My Soul, aroused to pleasant dreams, thank Thee.

For My spirit, refreshed anew to the content of life thank Thee.

Receive then, carrissime, this earnest of my obligation as bearing My whole being, an unworthy, but willing gift. And grant me yet this one prayer, that I may be Forever

Despite the ongoing problems she had with the Clark school board getting paid and despite his over the top romantic longings, they were finally married on June 9, 1938, as I explained in Love Letters and the Course of True Love.  And she did not regret resigning from the Clark teaching job. 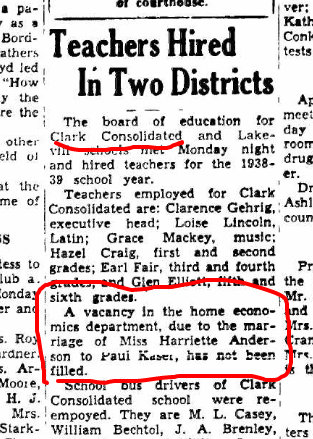 She had hoped for a real honeymoon trip, writing from her own road trip,

We aren’t crowded in the bus and so far I don’t believe the trip will be very expensive. At least I will try to keep it from being, because there are several things I want, I wish we were on our trip now. I bet we can have a nice trip and not spend much in fact I would even like to stay in a tourist camp with you.

However, they spent their honeymoon one night at the Neil House hotel in Columbus, paying an outrageous $4.50 for their room and more to keep the car in the garage. Her memories included the smell of peanuts from the peanut vendor outside the front door. 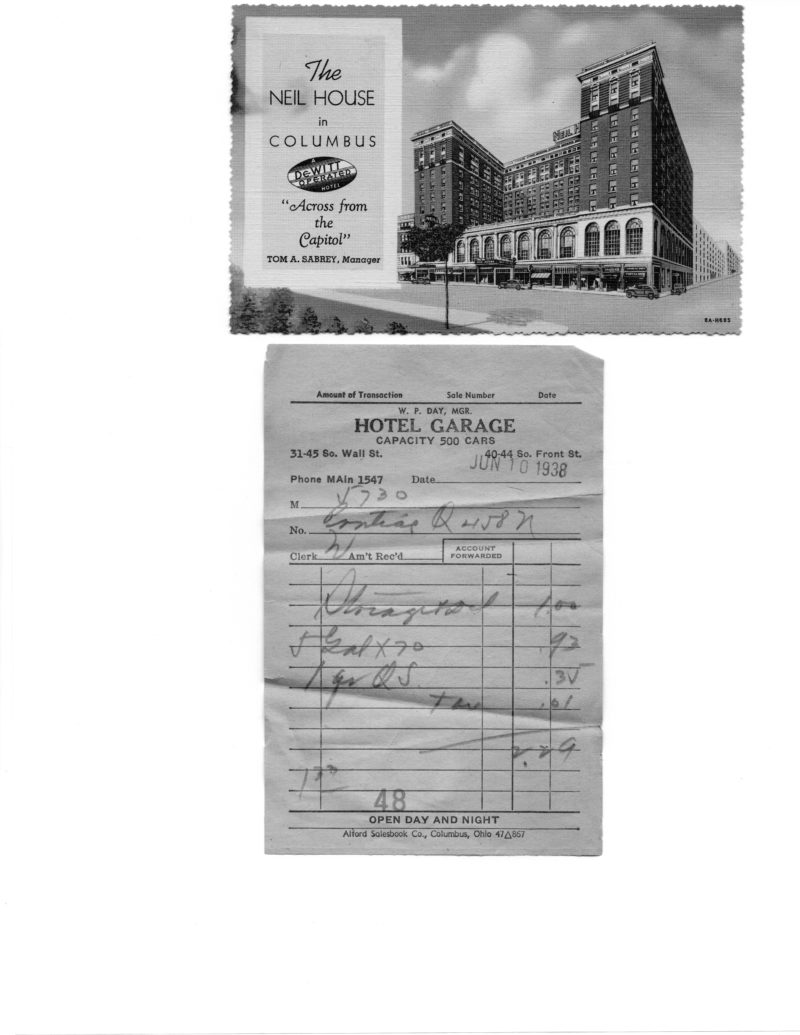 Neil House hotel in Columbus Ohio and parking garage receipt for the night of their wedding.

Then they spent a few days at 4-H cap Hervida in Washington County, where Dad had been hired to lecture about weather because of his job with the Weather Bureau. There he lectured on weather subjects and she did First Aid. She noted that she had learned First Aid when she was a basketball coach.

Despite the problems and difficulties that plagued their five years of courtship, the marriage lasted the rest of their lives, and for the rest of their years, they grew nostalgic about the 9th of any month. Dad addressed anniversary cars to The Dutchess for decades.  In 1988, we celebrated their 50th wedding anniversary–marking that special day. 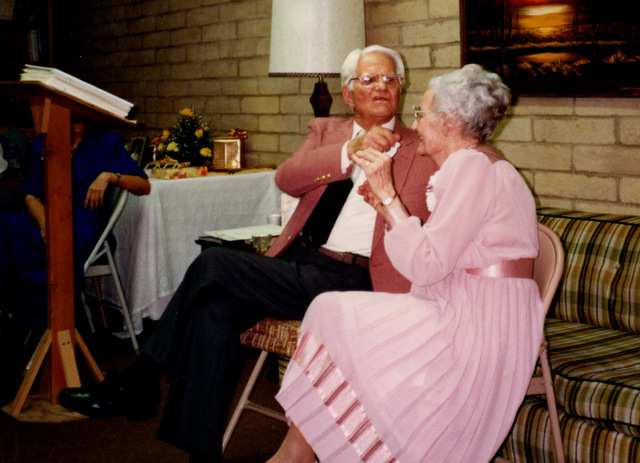