Dear Wife: …If I can only have good health I don’t care.  My health is what I am afraid of and not the rebels.

“Happy is the man that to him the future is a sealed book.”  From The Story of a Common Soldier by Leander Stillwell, a Union soldier from Illinois.

Since the last dated letter we have from Erasmus (February 17) the 16th Ohio Volunteer Infantry has moved twice, and received paychecks twice.  It seems obvious there is a letter missing, but the more I think about it, the more I doubt that missing letter is the last one I published.

A great deal has transpired that Erasmus does not mention, or only alludes to.

On March 11, the 16th had taken boats from the miserable, muddy Young’s Point to a much better camp about  ten miles upstream at Millikin’s Bend. They are camped on the Louisiana side of the river, but not far from Vicksburg on the Mississippi side. They are now part of General McClerland’s 13th Corps under General Ulysses S. Grant, part of the Vicksburg campaign.

Map of the move by river from Young’s Point to Milliken’s Bend. From mkwe.com

Surely everyone knew the battle was about to begin, because Wolbach reports that they the army “was stripped of everything that was not absolutely necessary for campaigning.”

Cpl. Wolback reports in Camp and Field that when they broke camp in March, “The air was mild and the men relished the change and worked cheerfully.” Erasmus is not as irascible in this letter as in some others.  They have a better camp, they have received pay checks, and after a very long period of waiting, it appears they are on the move.

After nearly a month camped at Miliken’s Bend, waiting for the spring flood tide to recede on the Mississippi so the Union can start the Vicksburg campaign, the troops are ordered to break camp on April 5 and they march  away from the river, to Richmond, Louisiana on Willow Bayou.

Erasmus speculates on what will happen next. 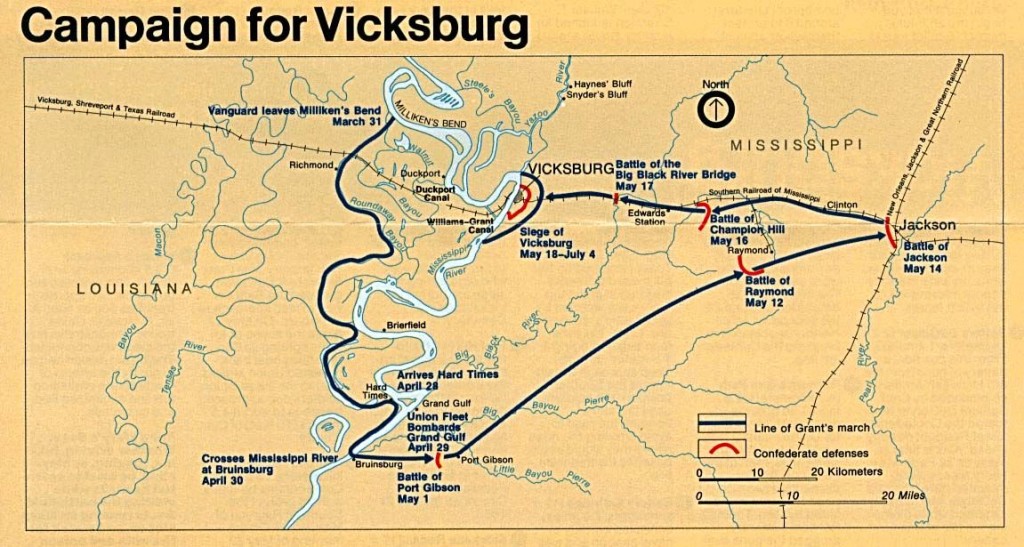 The route of Grant’s army from Milliken’s Bend, Louisiana, south to Richmond. This map also provides a picture of Grant’s entire campaign against Vicksburg during the spring and summer of 1863. The 16th Ohio was part of Grant’s route the entire way (dark blue line). Map from www.mkwe.com

In fact, the Vicksburg campaign has begun, and they are marching south in order to circle around Vicksburg as part of General Grant’s overall plan of attack. There will be spots of Southern resistance along the way.  Wolbach says:

“The enemy in numbers unknown to us, were occupying the little town of Richmond, capital of Madison Parish, on the Bayou Vidale, fourteen miles back from the river, and their scouting parties several times came in sight of our camp but always ‘dug out’ in haste when some of our mounted men got after them.”

Erasmus’ letter follows his usual pattern. He describes his surroundings and his personal situation, then answers Suzi’s questions and talks about fellow soldiers, and then things about the farm.

We are camped in a beautiful country but the destroying angels have come worse than the Seven Plagues of Egypt.  We are camped by a big bayou.  It is some wider than Killbuck [Creek that runs through the valley in Holmes County, Ohio] and six times as deep.  Has fish as large as a man but can’t catch them.  There are big alligators in it and it is good to keep the boys from going in and getting drowned. 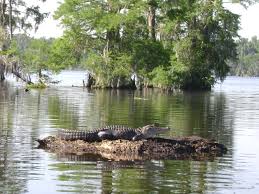 After telling Suzi that he will be sending her $20 express and has sent $45 with Captain LIggett, E. goes back to talking about Ephraim Cellars–adding some detail to the information he wrote back in February. Since many men were sick, he had to be on duty more than usual, and for the first time, we learn that Erasmus also was sick.

I was not very well myself to go when not on duty.  I saw him the day before he died. I did not think he would die so soon.

Apparently Ephraim’s family wants to go to where he is buried and move his body, but Erasmus discourages that.

When he died we did not get word till I suppose he was buried without any coffin box as all the soldiers was that was buried down there.  I think it would be of no use for them to come after him now and they could not find him and I don’t think they could raise him now anyhow besides nobody can get transportation unless he is on government business.

Sadly, although Erasmus had previously reported that Ephraim had talked to him of going home, he now says, “he was not in his right mind part of the time and I could have but little to say to him.”

Then he moves on to Albert, that troublemaker who seems to dominate the conversations between Erasmus and his wife.

You wanted to know if Albert had the dropsy.  He has been grunting around since he came into the service.  I cannot tell what ails him but I know he wants a discharge for the one thing.  We left him back at the hospital.

Albert never did get to get out of the service because of illness. Instead he was killed in battle at Vicksburg.

Erasmus reports that Cpt. Tanneyhill has heard where the prisoners are. They have traveled down to New Orleans, and are returning north via the Atlantic Ocean. (Perhaps by now, Erasmus knows that his brother is among those prisoners who were captured back in December at Chickasaw Bayou.)

John Christopher, another neighbor has died of his wounds, Erasmus reports. Christopher 42, left a wife and six children behind on his Killbuck farm.

And Erasmus turns from the Vicksburg campaign to the inevitable instructions to Susie about the farm.

This is locust year in Ohio. I want you to raise lots of little roosters and when I get home I will show you how to strip their bones. E. Anderson

To see the previous letter, #9 In the Dark Woods of the Mississippi, read here.
The Next letter: #11: Water Water Everywhere