I live in Arizona, and I recently saw a map showing this year’s flu outbreaks state by state. I would show you the map, but it changes each week, so check to see what the Centers for Disease Control is saying about YOUR state.  By now, the epidemic may be lessening, but just in case Arizona still needs some invalid food, Mrs. Beeton has a suggestion:

Mode.– Place a very thin piece of cold toast between 2 slices of thin bread-and-butter in the form of a sandwich, adding a seasoning of pepper and salt. This sandwich may be varied by adding a little pulled meat, or very fine slices of cold meat, to the toast, and in any of these forms will be found very tempting to the appetite of an invalid.[/info]

Doesn’t sound terrible appetizing to put pieces of bread between pieces of toast–even with, or especially with salt and pepper?

Here’s a better use for the bread–one of my favorites, Bread Pudding.  Mrs. Beeton has three versions, baked, broiled, and what she calls butter-bread pudding.  I’ve chosen the baked version. 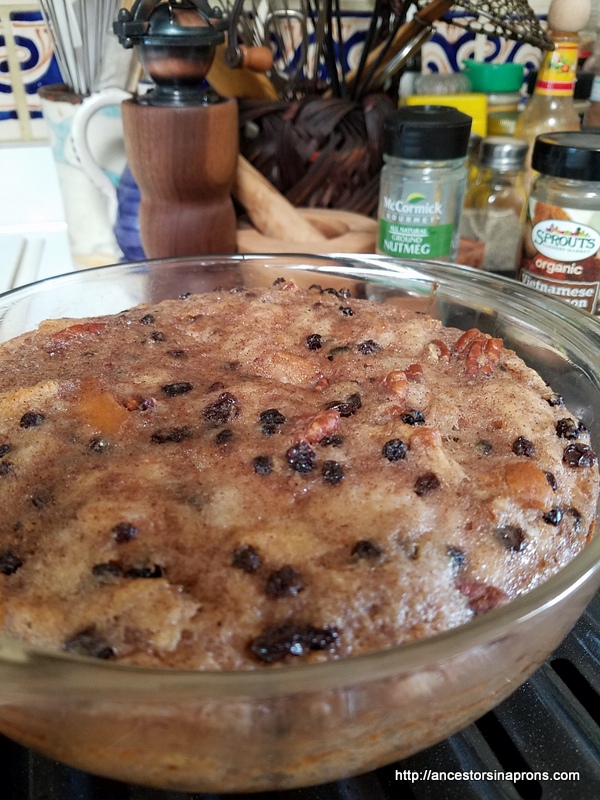 Actually, I’m going to give you three versions of bread pudding, (1860s, 1920s and 1980s) because they illustrated one of the things that I find so fascinating about the history of the way we eat. We keep changing our ways of preparing food and popularity waxes and wanes.

Once I had tried the bread pudding with whiskey sauce recipe that I picked up in New Orleans at the Presidential Nominating Convention in 1988, I never went back to ordinary bread pudding. (Although I have to admit that I do not always indulge in the whiskey sauce.)

In looking to see how our ancestors may have cooked bread pudding, I found a striking difference between Mrs. Beeton’s Civil War era recipe and my vintage 1920’s Buffalo Cooking School Cook Book. See what you think.

Mode.– Put the milk into a stewpan, with the bitter almonds; let it infuse for 1/4 hour; bring it to the boiling point; strain it on to the bread crumbs, and let these remain till cold; then add the eggs, which should be well whisked, the butter, sugar, and brandy, and beat the pudding well until all the ingredients are thoroughly mixed; line the bottom of a pie-dish with the candied peel sliced thin, put in the mixture, and bake for nearly 3/4 hour.

Sufficient for 5 or 6 persons.

Seasonable at any time.

Note.– A few currants may be substituted for the candied peel, and will be found an excellent addition to this pudding: they should be beaten in with the mixture, and not laid at the bottom of the pie-dish.

NOTE:  Bitter almonds are not sold in the United States, as they contain poisonous substances. According to a Wikipedia article, in Italy they are/were used to flavor some cookies, but generally apricot pits have been substituted.  If I were following Mrs. Beeton’s recipe, I think I might  just use some apricot pits. I could not imagine what a bitter taste adds to this pudding. However, if she follows a complicated procedure outlined in this Victorian mansion web site, they would lose their bitterness. And Mrs. Beeton is not poisoning anyone since she is heating the bitter almonds and then straining them out of the milk before adding the milk to the pudding, two steps recommended in the linked article.

According to nineteenth century cookbook writer Eliza Leslie, Lady Cake “must be flavored highly with bitter almonds; without them, sweet almonds have little or no taste, and are useless in lady cake.” Bitter almonds (which are actually poisonous in large amounts) needed to be properly prepared prior to baking – the use of heat would safely extract their strong, bitter taste. This rather tedious process was done by blanching shelled bitter almonds in scalding water, and then placing them in a bowl of very cold water. They were then wiped dry and pounded (one at a time,) to a smooth paste in a clean marble mortar, along with a bit of rose water to improve the flavor and prevent them from becoming oily, heavy and dark. Miss Leslie suggests blanching and pounding the almonds the day before to achieve better flavor and a lighter color, thus enhancing both the taste and whiteness of the cake.

By the way, if you are a mystery book reader and are familiar with detectives using the smell of almonds to indicate cyanide poisoning…..they are referring to the smell of bitter almonds.

Next, we have the Buffalo Evening News Cooking School Cook Book.

Soak the bread in milk until soft. Add eggs beaten slightly, salt and sugar and then flavoring.  Bake in a buttered dish until a knife inserted in the pudding comes out clean.

NOTE:  Bland!  Other than the lemon juice, no extra flavoring. I find that blandness in many of the vintage cookbooks from the early 20th century.

Next we have the New Orleans version–anything BUT bland.

Cream together butter and powdered sugar. Slowly beat in Bourbon.

NOTE:  My how times have changed.  As I mentioned earlier, the whiskey sauce is optional, but oh, so good, if you decide to use it.

Because we do not care for pineapple, I substitute chopped pecans (Yes, entirely different!) and if you have them on hand,  use golden raisins.

There you have your choice of three generations of bread puddings, and although they make fine food for invalids, you don’t have to get sick to try them.