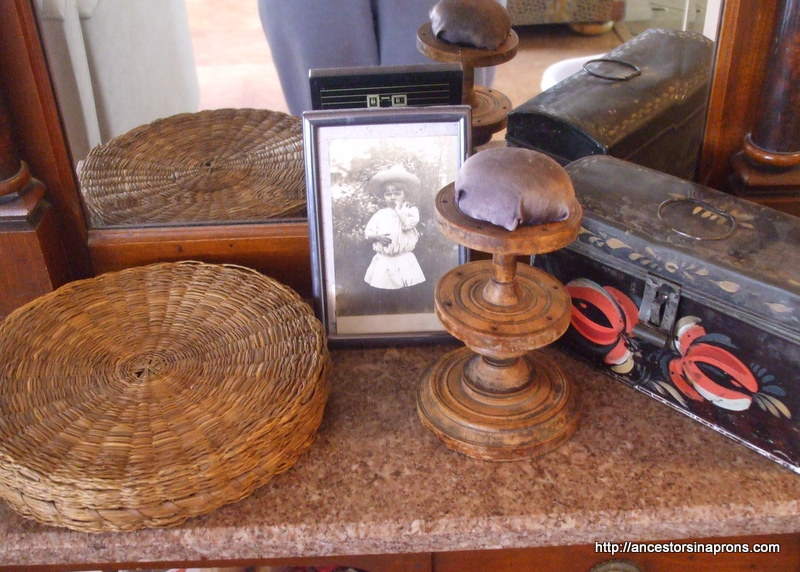 3 Generations sewing things and my mother as a little girl.

Actually, counting my mother and me, I’m talking about FIVE generations, but I’m showing you some pictures of sewing tools and accessories belonging to and used by three generations– my grand-mother, Vera Stout Anderson; my great-grandmother, Harriet Morgan Stout; and my great-great grandmother, Mary Bassett Morgan.

When I introduced this blog, I said that I most often thought of my ancestors in the  kitchen. However, I have realized that the women have other things in common.  Until the present younger generation, every woman had a sewing basket and sewing was an almost daily activity.

One day, I noticed an unassuming little basket sitting on a shelf, and wasn’t sure where it had come from. 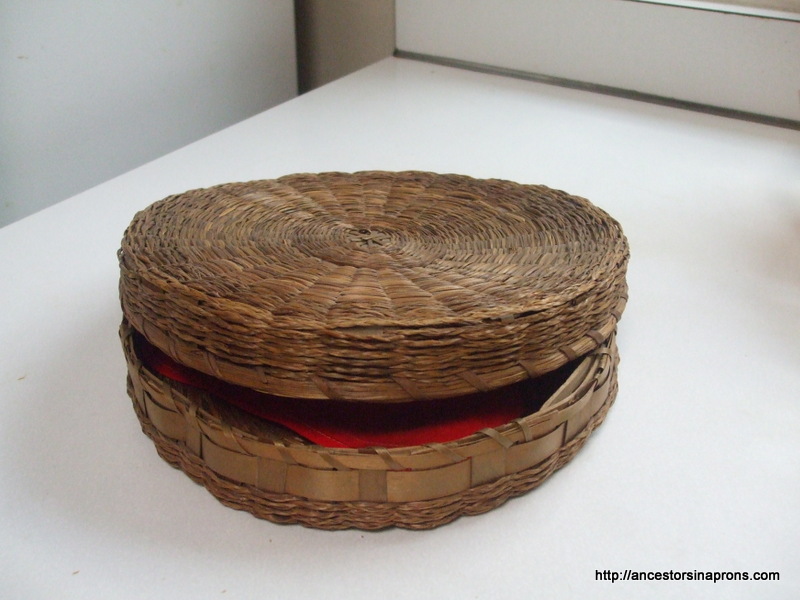 When I opened it, I noticed a note in my Grandmother’s hand and I immediately thought the basket belonged to my great-grandmother Harriett Stout. I wrote Stout beside grandma’s note. Then I realized I was wrong. I should have written MORGAN.  If this belonged to my grandmother’s grandmother, (Harriette Bassett Platt Morgan (1810-1890) it was older than I had thought. So please excuse my error. (I’ve fixed it, but didn’t re-photograph) 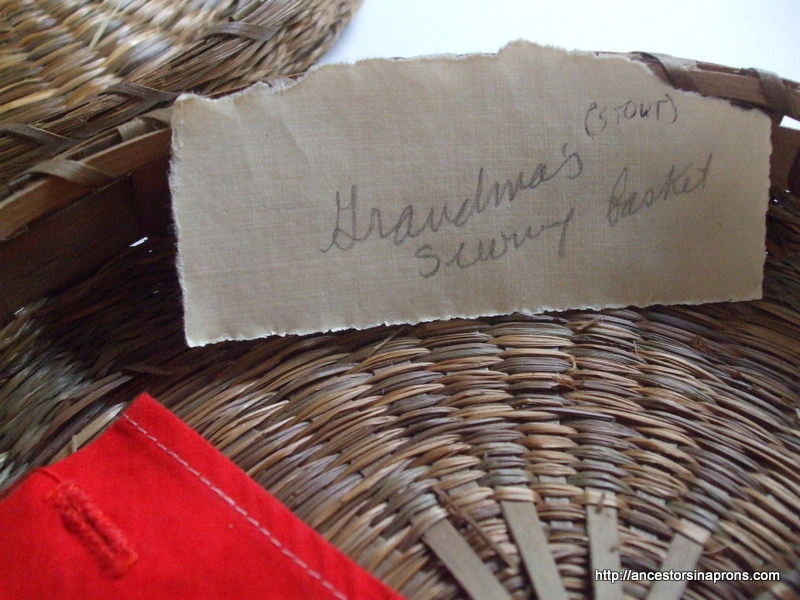 Mary Morgan’s sewing basket with note in my Grandmother Vera’s handwriting, and my erroneous addition.

Inside the basket was a red tie–you can see the top of it with a buttonhole to attach to a blouse button with a note that says Harriett’s.  But what really fascinated me was a handmade “book” to hold pins and needles.  Bits of fabric, cut with pinking shears, were sewn together to hold the tools of sewing. Some of the “pages” are edged with embroidery floss to prevent fraying. The outside bottom is hard (perhaps aged leather), and the top is brown velvet. 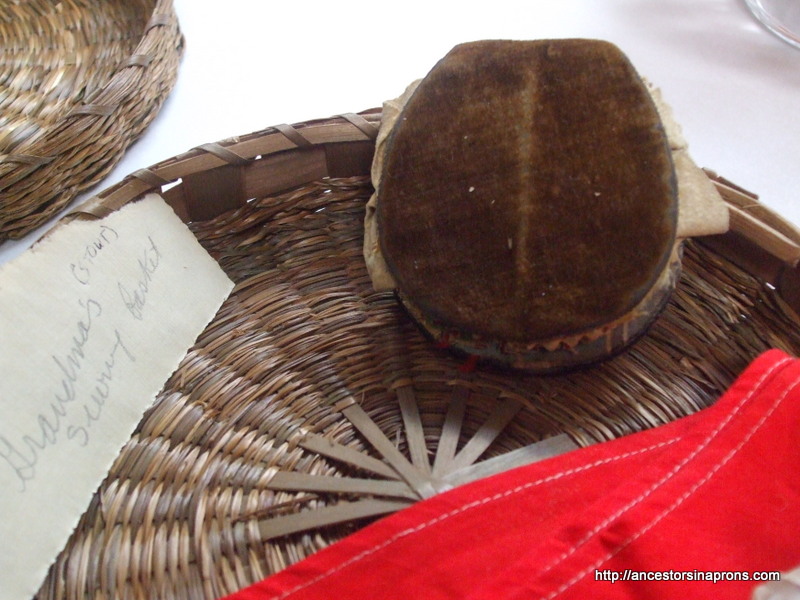 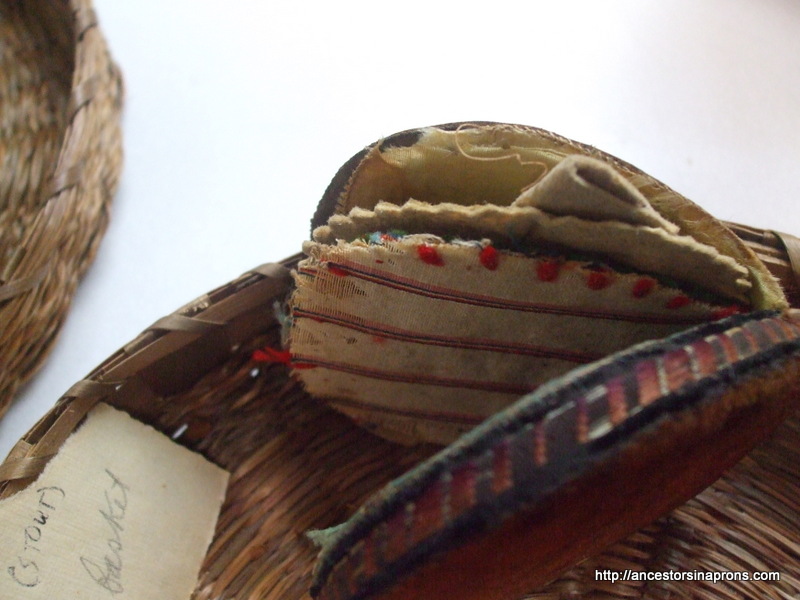 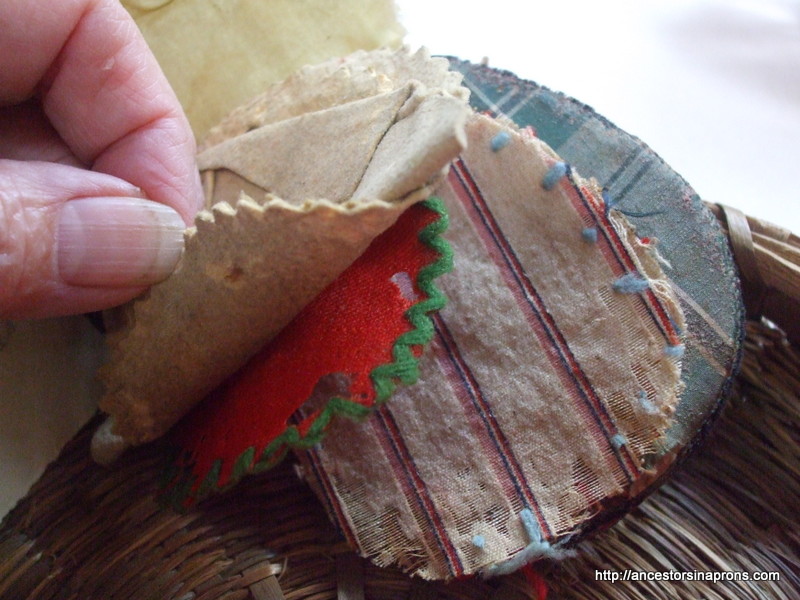 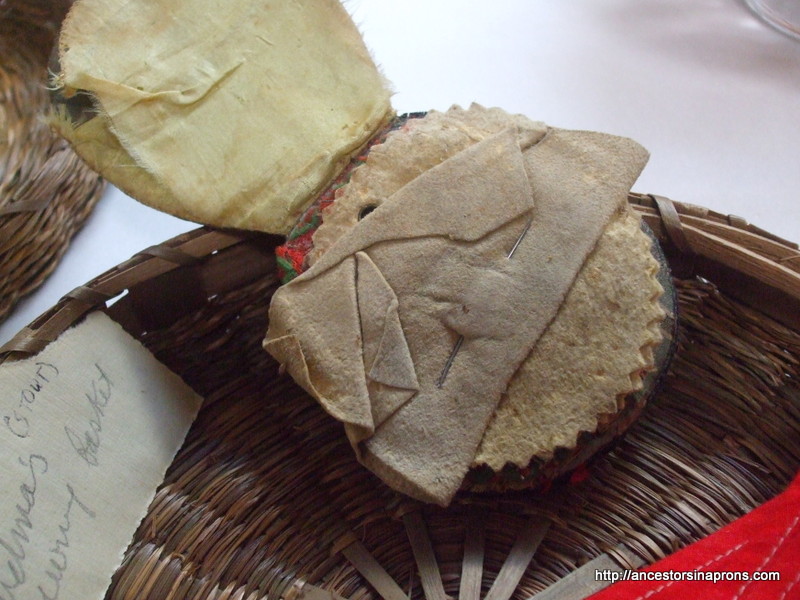 I have shown Great-grandmother’s pin cushion before, but here is the little work of art with a workaday purpose. 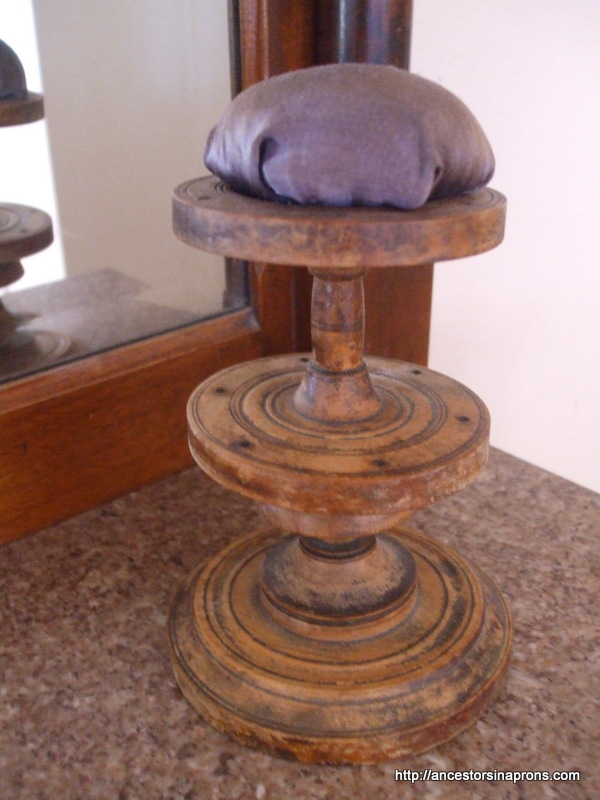 So much for needles and pins. What about thread? According to this site, wooden spools were used starting in the 1820s, but at first you had to bring back the empty spool to have it refilled. With the tiny size of great-great grandma’s basket, I’m guessing that she was still using hanks of thread rather than spools. I’m also guessing that those little holes on the “shelf” of the pin cushion could have held spindles to support spools of thread.

When I was a little girl, I loved to go through my grandmother Vera’s button collection. It was not a collection in  the sense of museum-quality things. It was just a repository for spare buttons that accumulate in every house.  I wish I knew how old this painted tin chest is.  It obviously has been around a long time. 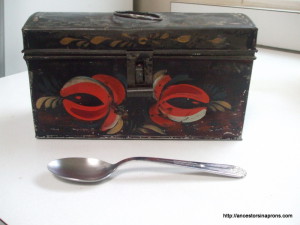 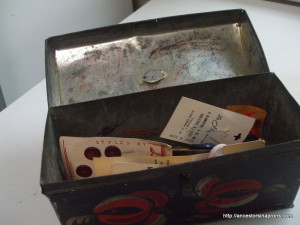 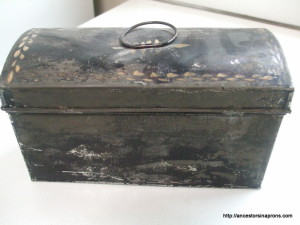 Beat up back and top of Vera’s tin box.

If only that box could talk! What a lot of history it has seen!

I learned to sew by hand, and then by a treadle- operated table-type sewing machine that my grandmother owned. This is a similar machine from a Singer instruction manual. in the late 1800s. Wish that sewing machine had not disappeared in the mists of time. 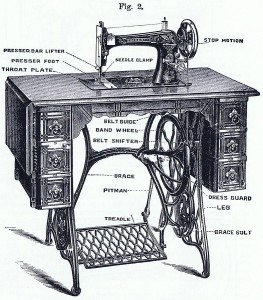 I do have another vintage sewing machine. My mother had one of the very early electric Singer portables, bought in the 1920s. I still have it, and one day I’ll get it out of the storeroom and show that to you, too.

For more information on sewing notions of the 1800s, this collectors website has a little of everything. (Be sure to check the individual notions listed in the side column for more information.) And as a person who used to sew my own clothes, I found this article on period sewing fascinating. Little did I know that seams were on the outside until the early mid 1800s.