Try as I might to stay on track, I am easily distracted from my planned research path.  For instance, right now, I am trying to stick to the difficult tracing of the Smith family of Knox County, Ohio–family of a paternal great grandmother. One problem is Susan Kaser.

At the same time, however, I am trying to keep track of new DNA matches as they show up, and figure out how it is that I match them.  In order to find out how I match someone when Ancestry only gives me the vague 4th-6th cousin, high probability, or perhaps Ancestry gives me a list of names that match with the other person. Inevitably that includes a Smith, but some times it includes a list of eight different names, all of whom might be possibilities, so I have to track those families on my tree and on the tree of the person with whom I have a match.

Notice I said “I have to”.  That compulsion is not written in stone, but I simply can’t resist. This week I write about a couple of the people I chased through the forest of family trees.

Susan Kaser (also known as Susannah) 1st cousin 3x removed. Married (or maybe not) to a Lauer or Lower with whom she had a daughter named Rebecca and perhaps five other children. On Ancestry, I discovered a picture of Rebecca, the daughter (or one of the children) of Susan Kaser. 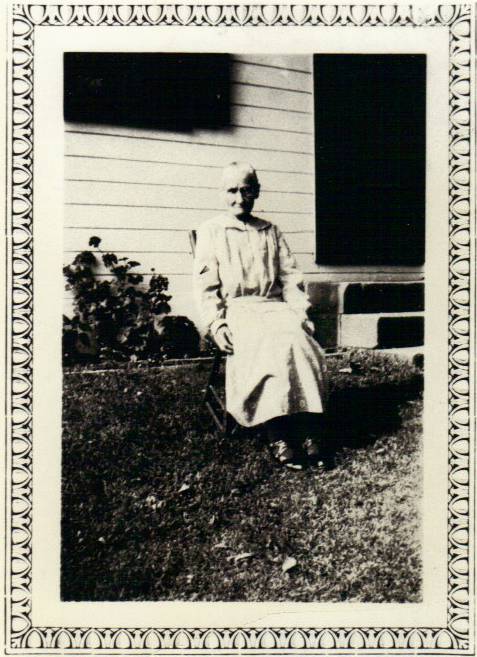 Picture of Rebecca Kaser/Lauer Zaugg posted on Ancestry.com by pbeecy.

Before a DNA match showed up on Ancestry, I only had an intriguing note in the Kaser History that indicated that Susannah Kaser (1824-1907) had 6 or 7  children but had never married!  She was born in Holmes County Ohio and her parents  were Jonathan Kaser and Mary Stahler.

I learned that my DNA match, Barbara, was related to Susan Kaser. Barbara’s great- grandmother Rebecca Kaser/Lauer 1847-1928, married John Zaugg.  Rebecca was the daughter of Susan Kaser Lauer/Lower, according to the Barbara’s family. Records show her as either Rebecca Kaser or Rebecca Lauer or Lower.  This seems pretty conclusive, since Barbara had been told the family history by her grandmother. But more concretely, an 1880 census gives evidence that Rebecca Lauer was living with one of the Kaser families. Unfortunately, Rebecca’s family did not know the first name of Rebecca’s father. I dug more deeply into Susan Kaser’s history.

But which Susan Kaser?  I found a bewildering array of Susan (or Susannah) Kasers A few could be eliminated fairly easily because I could trace their life and they did not have a daughter named Rebecca or lived at the wrong time. 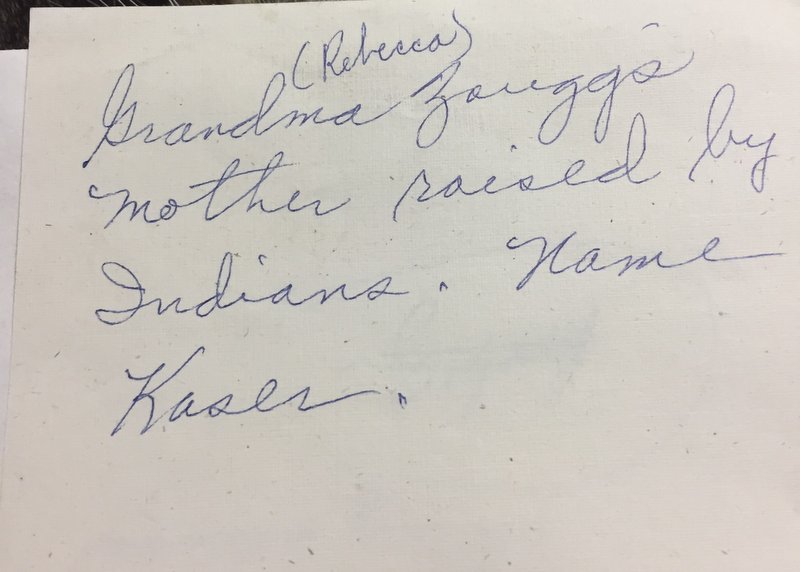 Note about Susan Kaser from Barbara  her great-grand daughter. Written by Barbara’s aunt.

A note in Barbara’s trove of family pictures (above) said, “Rebecca’s mother raised by Indians.”  I really don’t take that literally for several reasons.  Mainly, Susan would have been born long after the American Indians had left Ohio.  I had heard that phrase many times when I was growing up in Ohio, and it meant something like “This kid is uncivilized (wild) and wasn’t raised properly.” A slur on both the American Indian and on the child (and the child’s parents.)

In the 1850 census “Susan Cacer” is listed at 25 years old as the (probable) oldest of the children of Jonathan “Cacer,” who is 45 years old and is a carpenter  the same as his father, my 3x great grandfather, Joseph Kaser (1776-1842). The 1850 and 1860 census reports do not indicate relationship to head of household, but applying logic to the ages of the children, place of residence and place of birth often will indicate the relationship. However, if this is the mother of Rebecca, who would have been three years old in 1850, where is the child? I have not found Rebecca in 1850.

Susan apparently moved on and left her daughter Rebecca behind, because in 1860, when she was 13, a Rebecca Lauer was living with Edward Kaser, presumably her uncle .  However, it looks as though when Susan needed a home, Rebecca Lauer Zaugg took in her mother. In 1880, Susan Kaser is shown in the home of Rebecca and her husband as “mother-in-law”. Oddly, her occupation is listed as “servant.”  Note she is still called Kaser which means either she never married the Lauer who was Rebecca’s father, or she reverted to her maiden name.

Beyond that, I’m still trying to track Susan, including a possible marriage to a man name Sheneman, with whom she might have had five children. I found probate papers for Susan Lower, Wayne County, Ohio, that named those Sheneman children, but did not name Rebecca.  (An addenda included a letter from a Rebecca Miller claiming kinship–wrong last name.)  That legal filing would explain the Kaser History assertion that she had 6 or 7 children–Rebecca plus five. Perhaps the author of the Kaser History saw those probate papers?  If true, that would have been very handy, however it just did not work when I looked at the individual Sheneman family members. Census reports for 1860 and 1870 showed that the Susan married to a Sheneman in Holmes County Ohio was not the right age.

So Susan, for the moment at least, I’m left with the Zaugg family opinion of you–” she was a character … and she even smoked a pipe.”

With all these loose ends, I fully expect to be returning to Susan Kaser some time in the future.