Three years ago, some members of my family gathered in Sudbury Massachusetts to pay homage to ancestors–where they had lived and where they now lie under weathered gray stones. While there, we stayed at the  Longfellow’s Wayside Inn–in the building first built by our ancestor David How.  Numerous How/Howes,  Stones,  Bents, and other pioneers in this land were our ancestors and we discovered their names carved in stone again and again as we went visiting cemeteries.

I am terribly behind in the 52 Ancestors challenge from Amy Johnson Crow.  Better late than never might not be a really good excuse when we’re talking about visiting cemeteries (Ha, Ha)–but it is the best I can do at the moment.

Our little group of relatives visited the Sudbury old cemetery, where we saw a memorial to those who battled during King Philip’s war. Visiting New England cemeteries will teach you the history of the area. If you don’t come from New England, you may not even have heard of King Philip’s war, but here in one of the Puritan villages of New England that was tragically affected, the memories are as fresh as are the battles of the Revolution. Our ancestor Samuel How’s house and barn were burned down and other ancestors lost family members in the battles around Sudbury. 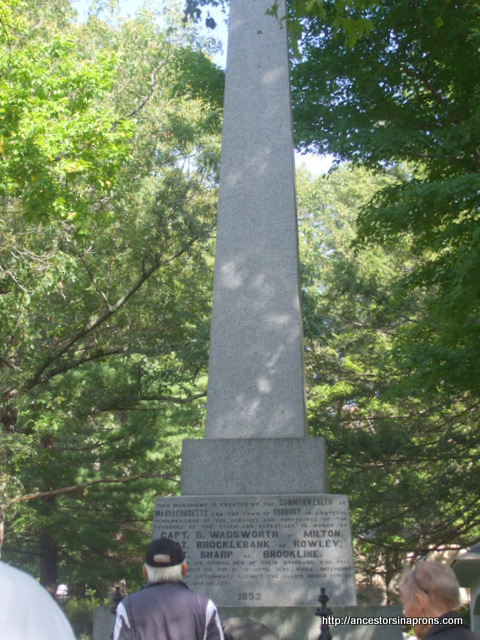 Memorial to those who lost lives in Indian Wars Sudbury Cemetery

The wording of the memorial hints at the devastation.

“This monument is erected by the Commonwealth of Massachusetts and the town of Sudbury in grateful remembrance of the services and sufferings of the founders of the state and especially in honor of Capt. S. Wadsworth of Milton. Capt. Brocklebank of Rowley. Lieut. Sharp of Brookline. and twenty-six others, men of their command, who fell near this spot on the 18th of April 1676, while defending the frontier settlements against the allied Indian forces of Philip of Pokanoket.  1852.” 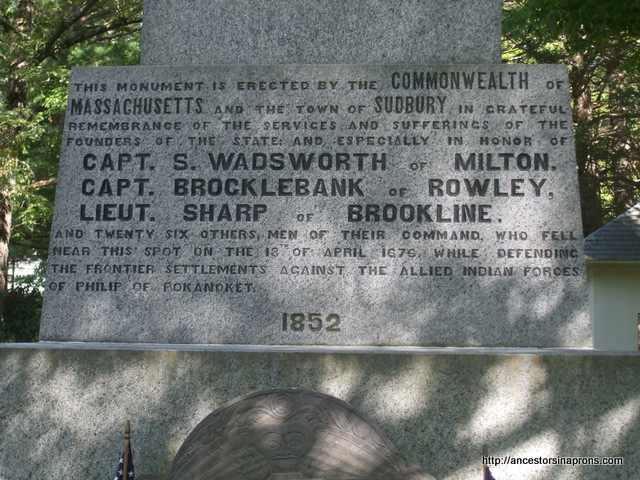 Monument to Sudbury men who died in King Philips War

I later took a side trip to Rutland where I discovered a forest of old gray stones.  Here while visiting cemeteries, I found more  familiar names and a memorial to those who had given their lives in the French and Indian war or the Revolution, the list included two ancestors, both named Samuel Stone. 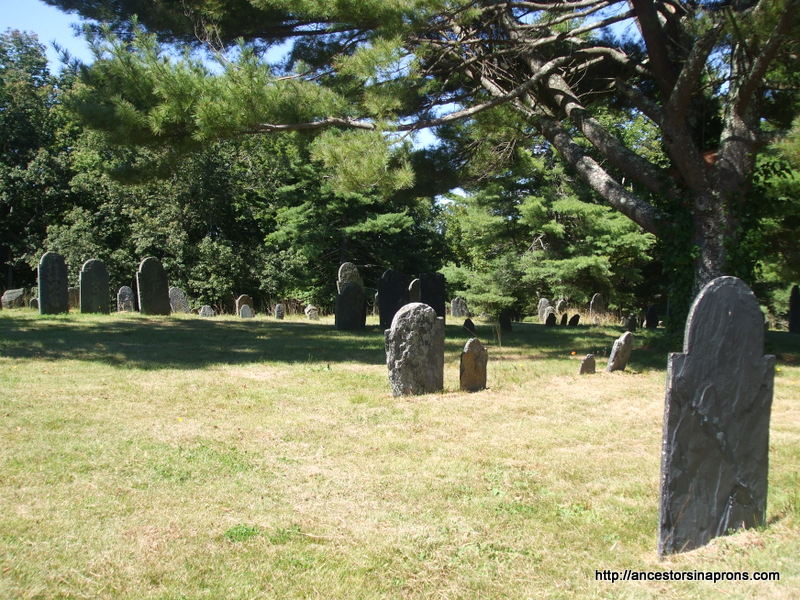 Rutland Cemetery with old tree. The stones stretch back into the surrounding woods. 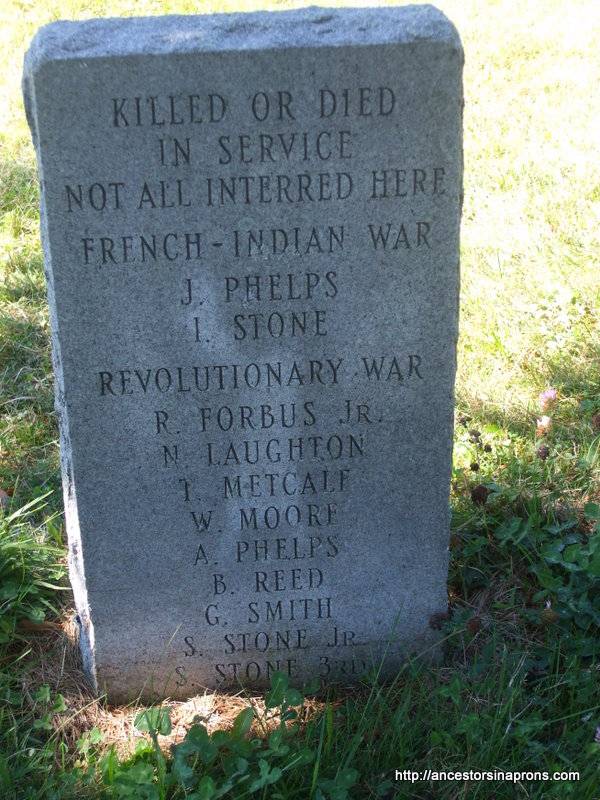 Rutland Cemetery Memorial to those who died in French-Indian War and Revolution.

“Killed or Died in Service. Not All Interred here.

Lt. Samuel Stone, 3rd , my 1st cousin 6 times removed also had a son who served in the Revolution. There are so many Samuel Stones and so many served in the militia pre-Revolution or during the revolution, that the “Jr.” and numbers are not much help. I have a Samuel Stone Jr. on my tree, but he died in Lexington rather than Rutland, so may fit the description of “not all interred here.” The Samuel Stone Jr. may refer to the son of “the 3rd,” and I have very little information on him.

On the other hand, I am quite familiar with another Samuel Stone Jr. Our 6th great-grandfather, Capt. Samuel Stone lived and died in Lexington, Massachusetts, and is the grandfather of Lt. Samuel Stone 3rd.  And you think YOU are confused???

Confusion aside, I did, however, find the gravestone in Rutland for the one designated here as “3rd.” 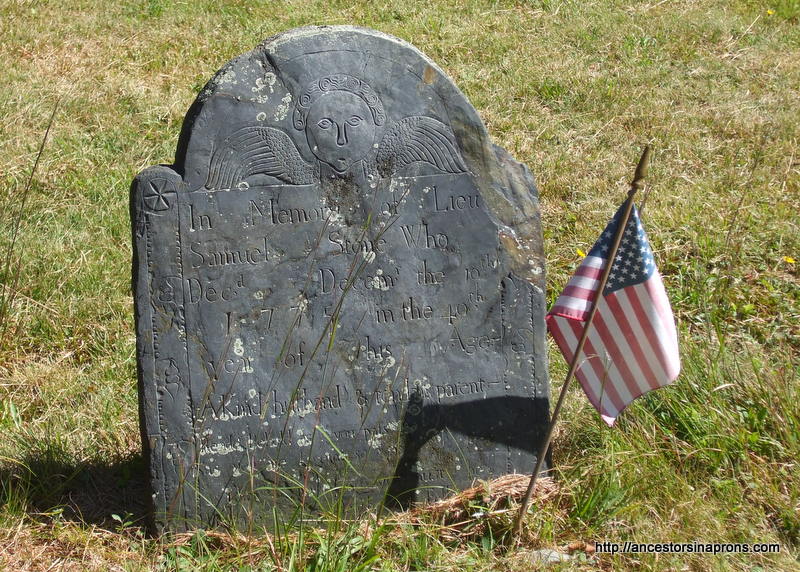 Lt. Samuel Stone, who died in 1775, probably not in battle, although he fought in the Revolution. 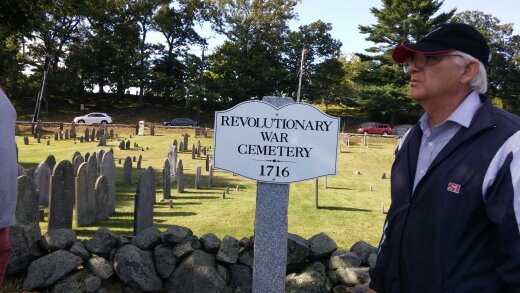 One of our family members at the entrance to Sudbury’s Revolutionary War Cemetery.

Our family group visited the Sudbury Revolutionary War cemetery where our family of Howe descendants, including a newly discovered cousin, the director of the Sudbury History Museum, gathered around the grave of our 1st cousin, 6 times removed, Col. Ezekiel Howe.

We felt close to this Ezekiel because he was the son of David Howe, our 6th great-grandfather who built the Howe (later Wayside) Inn where we were staying. Ezekiel took over the Inn when David Howe died.  His son  Ezekiel Jr., grew up at the Inn.  There is a story that Ezekiel Jr. ran the entire distance from Sudbury to Concord when the alarm went up about the battle at Concord Bridge. He was 19 at the time. 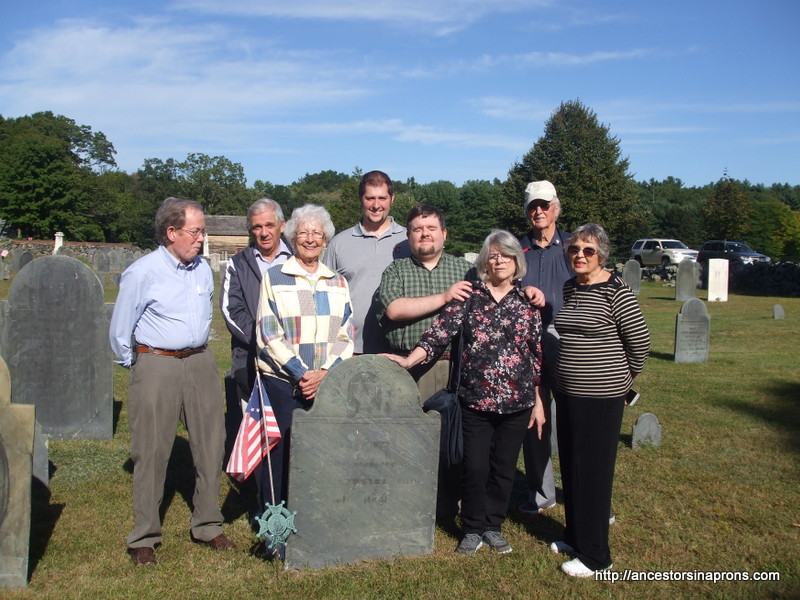 Unfortunately, other than his name, and death year–1796–this stone is unreadable.

My sister and I and our cousin could not resist paying a separate homage to Ezekiel Jr.’s wife Sarah, also known as Sally. We thought about the poet John Milton’s line,”they also serve who only stand and wait,” which applies to so many of the women of these villages of New England during the 1770s. 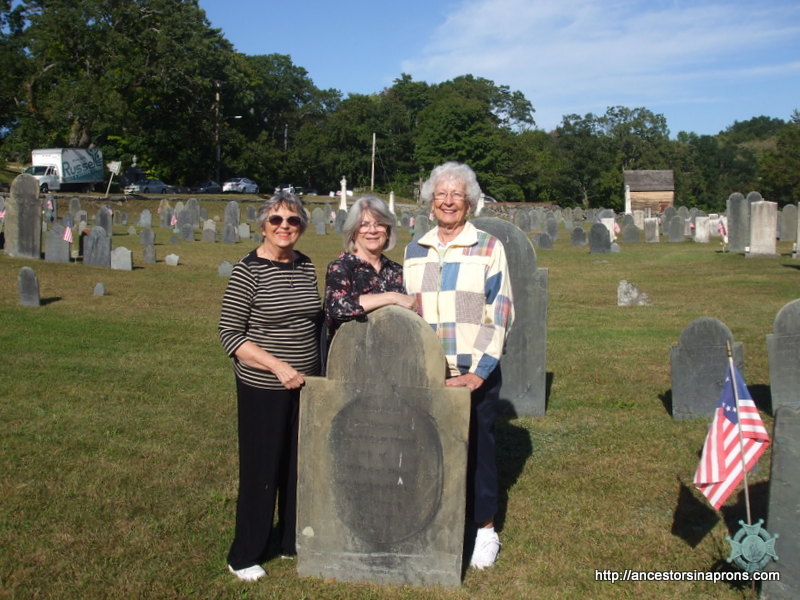 Expecting to find some of my oldest ancestors, I also visited the Sudbury Old North Cemetery (now located in the town of Wayland). I particularly wanted to visit the grave of (Leut.) Samuel How, my 7th great-grandfather, and the father of David How. Samuel had his fingers in many pies in the development of Sudbury and surrounding communities–you can read about his wheeling and dealing here. Unfortunately, I did not locate his grave, although I have a picture of his stone from Find A Grave.com.  Samuel How was one more ancestor who was a soldier in the pre-Revolution days. 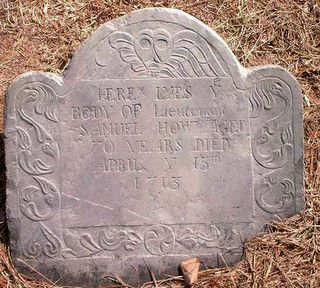 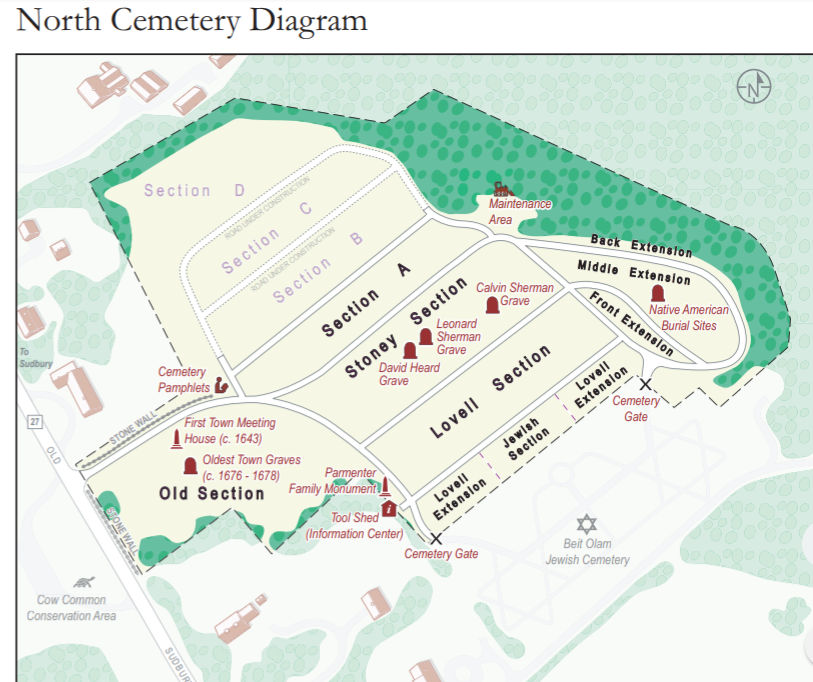 Despite the disappointment that sometimes accompanies visiting cemeteries, I found Old North fascinating.The interesting things I discovered included a separate burial ground for Native Americans–not seen in many cemeteries, and stones so old that a tree that grew between them, enfolded them in its trunk. 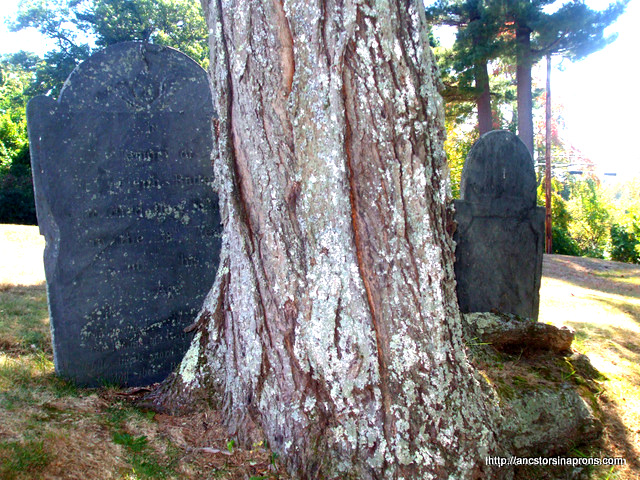 I am grateful for the nudge from the 52 Ancestors prompts to look back at my ‘visiting cemetery’ pictures.  I realized that I had a treasure trove of photos (there are many, many more than I had room for here) and I had not done anything with them.  By “anything” I mean I intend to transcribe the inscriptions, label them properly in my computer files, add them to the gallery of ancestors on my family tree at Ancestry, and check at Find a Grave to see if I have photos or information to add there. For too long, I have been a freeloader at Find a Grave–using it for my research, but rarely making additions to the information.  Now I have a chance to add some value.

I have submitted the two memorials–Sudbury’s to those who served in Kind Philip’s War and Rutland’s to those killed in the French-Indian Wars or the Revolution to the Honor Roll Project. Follow that link to see this effort to keep the names alive that are listed on the many memorials in this country and others.

That’s how visiting cemeteries can help you bring life to a cemetery.

In honor of Halloween, the theme of 52 Ancestors next week is “Frightening.” Since I have yet to unearth any really frightening stories among my husband’s ancestors, I refer you back to three earlier stories–two about the haunted room of Jerusha Howe at the Wayside Inn, and one about an experience my mother had as a child. 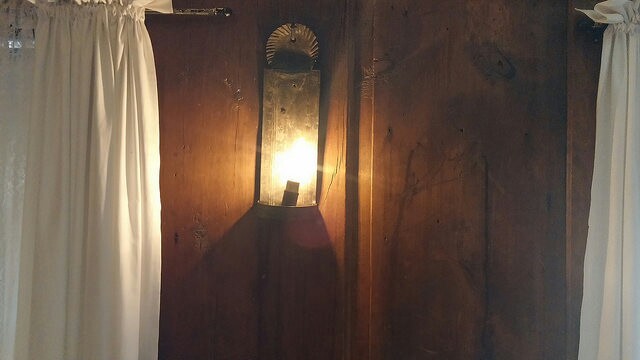 2. And the rest of the story-–Did I See Jerusha’s ghost?

3. My mother, Harriette Kaser, frightened by a corpse when Mother was a little girl. 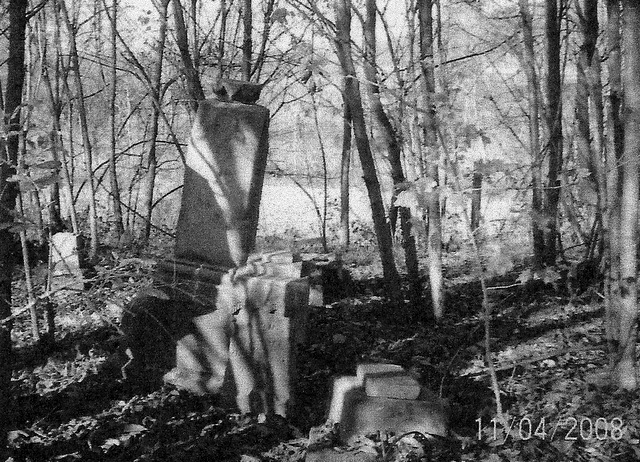 4. And a picture essay of some not-at-all frightening graveyards.

Do you have a good ghost story that has been passed down in your family? 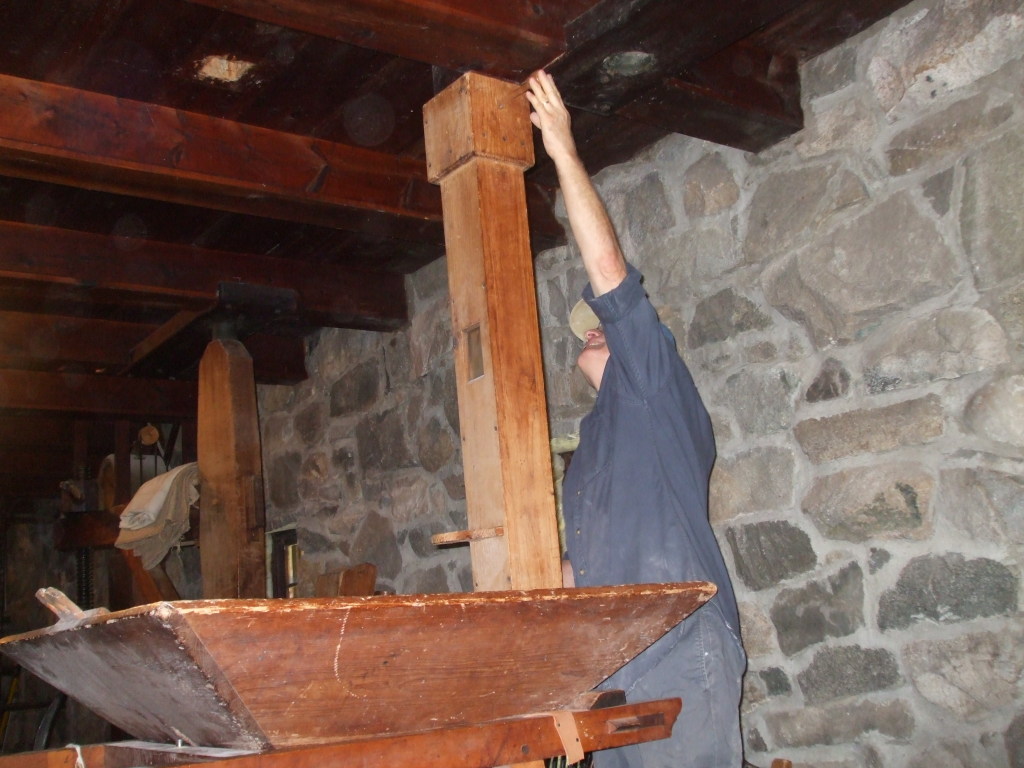 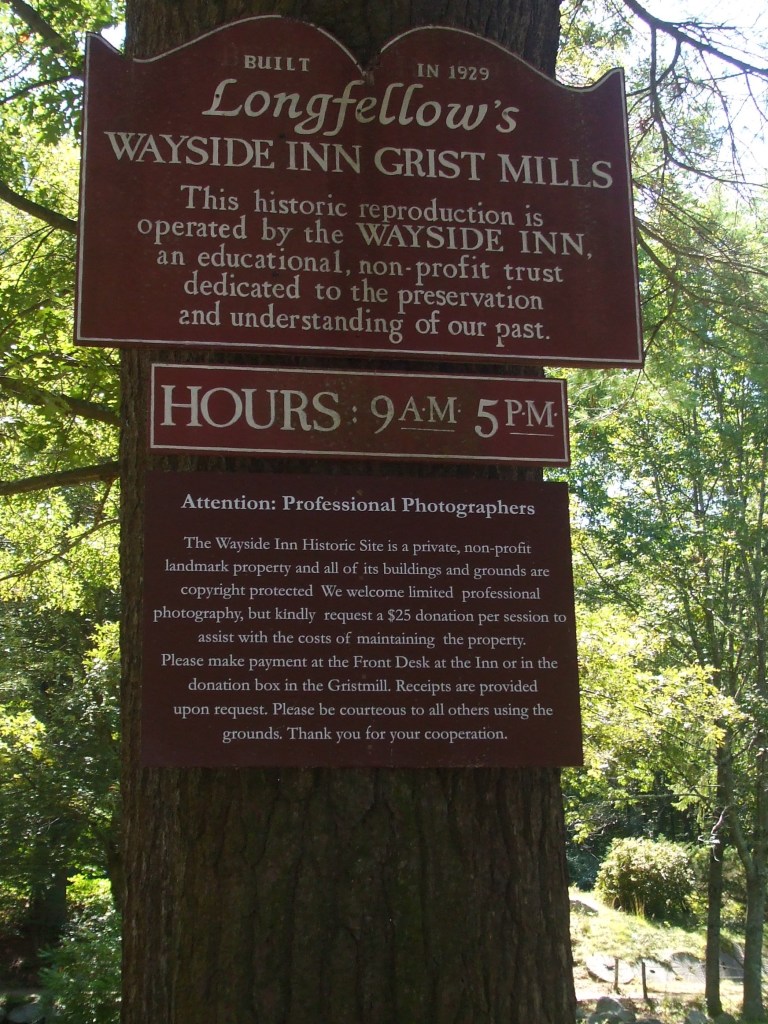 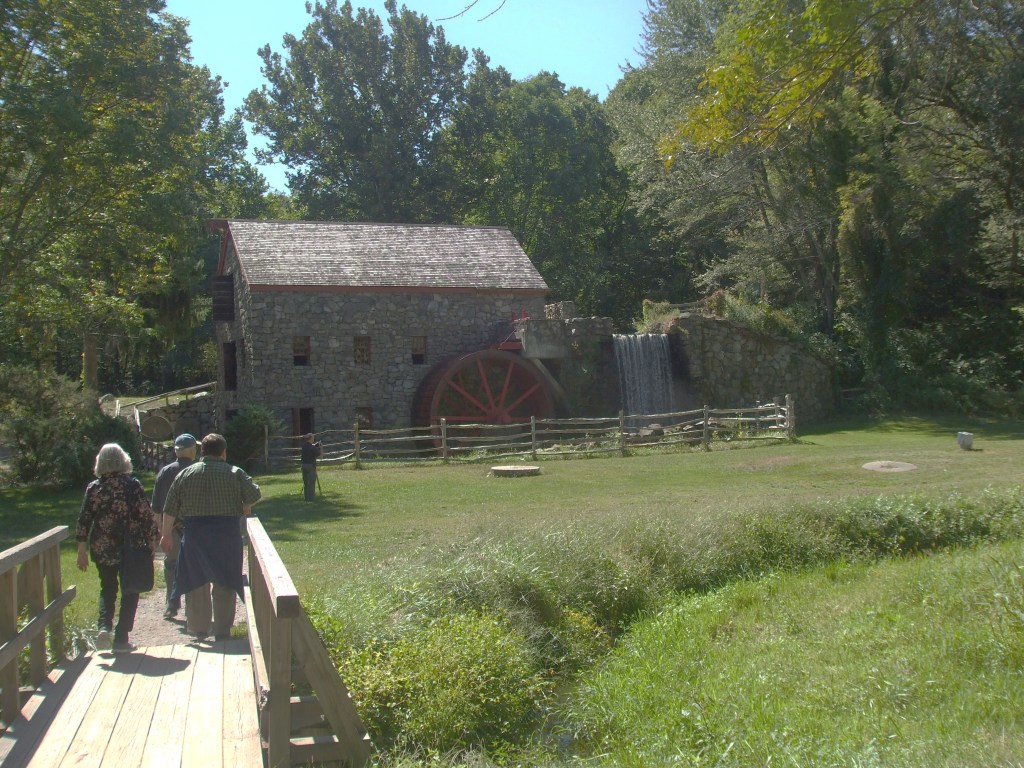