One day I was browsing through the neighborhood butcher shop and noticed a list of German sausages taped to the meat case. It included weisswurst. The list piqued my curiosity.  I have been looking at German recipes as I research my German ancestors, (even when I go astray) and realized that I know very little about German sausages. I’ll begin with Weisswurst.

I certainly was unaware of the huge variety and the butcher’s list of a dozen or so kinds, prompted me to resolve to try out and write about them–link by link.

Of course we know brats. Bratwurst are the long skinny sausage that probably inspired what we think of as the all-American hot dog. Surprise, surprise–although the term bratwurst has become a blanket for grilled skinny sausages made of various meats, there are other names for some types of bratwurst.  So I will be returning to bratwurst.  But now–beyond brats. 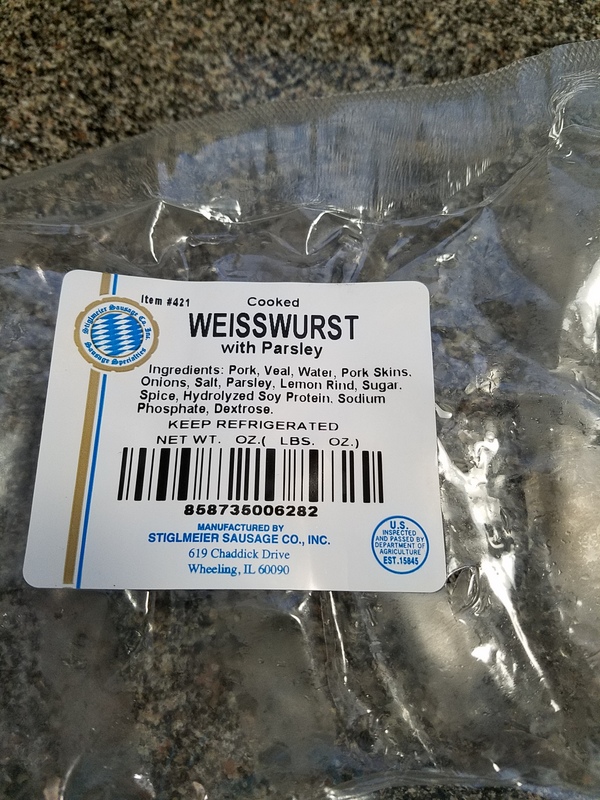 I have found memories of eating a white sausage when we visited Switzerland way back in the early 80’s.  It was my first experience with a white sausage, and I didn’t explore what it actually was made of, I just doused it with mustard, folded it in a piece of bread and enjoyed.

Turns out it is a traditional veal sausage from Bavaria and Austria.  That fits my research, since some of my ancestors come from Bavaria.

Weisswurst (the w’s are pronounced like v’s) gives you a pale, veal sausage (weiss=white)  that gets its color from what is omitted–namely nitrates.  That means although the sausages have been cooked, they will not hold up as long as sausages with preservatives, so buy only what you are going to eat.

Seasonings may include mace, ginger, lemon peel and pepper, but parsley is standard.

Since weisswurst is already cooked, all you have to do is drop it in boiling water to warm it up.  This is not a grilling sausage.  It has a rather thick casing, so the way it is eaten is to peel off the covering before eating. 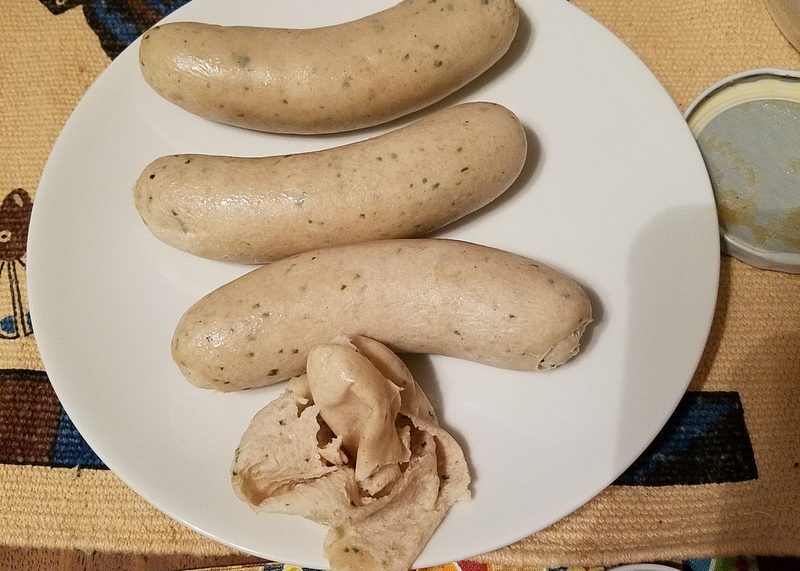 Bavarians eat these weisswurst sausages as a mid-morning snack rather than for a meal. To be traditional, combine them with a puddle of sweet German mustard and some pretzels and beer. I’m not sure I’m German enough to be drinking beer in mid-morning! So, I had my weisswurst for dinner instead. 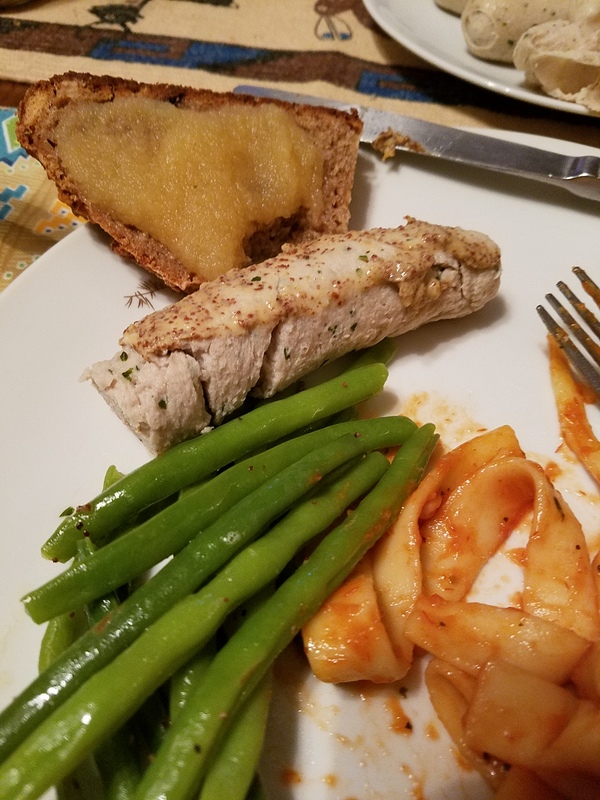 Dinner Weisswurst with mustard and green beans, bread and applesauce and noodles.

For my weisswurst dinner, I happened to have some wide noodles on hand, so I cooked those with a tomato sauce (not traditionally German, but not unheard of.  Applesauce on dark bread always goes well with a German meal, and fresh green beans fit anywhere.

If you decide to make your own sausage, there are several websites with recipes.  Let me know how it turns out.

My weisswurst sausages are purchased at the local family-owned Dickman’s Meat & Deli in Tucson.  Although they make their own sausage,  Dickman’s buys the German specialty sausages from an Illinois Company, Stiglmeier Sausage Company.