Tomato Welsh Rarebit is pure comfort food. Perfect for a cold and snowy day. (Since I live in Southern Arizona, you’ll pardon me if I just go ahead and make it without the chilly atmosphere.)

Welsh Rarebit  also has the benefit of being easy to make and economical, which I’m sure was an attraction for my mother, Harriette Anderson Kaser.

For such a simple dish–basically melted cheese on toast or crackers, with tomatoes added, the dish has a complex history. 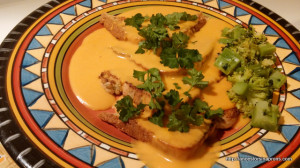 The most likely history  traces it to 18th century Great Britain. I believe cooks probably made it earlier in the versions without tomatoes–which didn’t arrive in Europe until the New World had been discovered.  The dish is associated with Great Britain and qualifies as “pub food.”  This is not the kind of meal you would find served on fine China in a white-tablecloth restaurant.

Perhaps the name came about because the British looked down their noses at food from Wales and Ireland and Scotland as “common”. And rarebit is rare only in that the word does not appear alone. It always is modified by Irish or Scotch, or more commonly Welsh Rarebit.

But what is a rarebit? Apparently, it is a corruption of “rabbit”.  And therefore Welsh Rabbit/Rarebit would mean a dish for people so poor they couldn’t scrounge up even so common a meat source  as rabbit.

And then there is Rumtum Tiddy (or Rinktum Tiddy), a name to win your heart, which seems to be the same dish, sometimes with variations, but then there are variations galore in Welsh Rabbit.

People who insist on linguistic distinctions only refer to Welsh Rarebit as melted cheese thinned with beer and poured over toast. When tomatoes are added, the fastidious language police would call the dish Pink Bunny or Blushing Bunny.  However I’m perfectly comfortable with calling my mother’s version Welsh Rarebit, or Tomato Welsh Rarebit. (Or Rink Tum Tiddy, for that matter.)

I wanted to make the simple version that my mother made, which eliminated using eggs or beer. Since mother did not leave a recipe card (why would she for such a simple dish?) I started a search.

Wikipedia refers to Mrs. Glasse’s The Art of Cooking, published in 1747, which has recipes for Scotch rabbit, Welsh Rabbit and two kinds of English rabbit. My copy of The Buffalo Evening News Home Makers’ Cooking School Cook Book (1925) presents recipes for “Savory Rarebit,”    “Pink Bunny,” “Cheese and Tomato Rarebit with Bacon,” Scotch Rarebit” and “Welsh Rarebit.” Their Welsh Rarebit is served with bread dipped into the cheese, like a fondue, while the Scotch Rarebit is open-faced toasted cheese sandwiches, baked in the oven. Clearly anything goes. 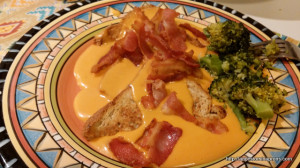 Of the many recipes available I chose one from the website A Hundred Years Ago.com . That website reproduced a Good Housekeeping  July 1911 recipe for Tomato Rarebit.  I left out the onion in their recipe, but otherwise the recipe–without any of the optional ingredients– seemed to be exactly like the Tomato Welsh Rarebit that my mother used to make for a quick meal in the 1940s through 1970s. I do not recall her topping the Welsh rarebit with anything, but I put bacon on mine and parsley on Ken’s.

You can choose from the options as you choose. Those ideas come from various other sources.

The sauce can do double duty. It is delicious on the steamed broccoli that I served on the side, and poured over soft-cooked eggs and ham for breakfast. You could even spread it cold on bread as a kind of homemade Cheeze Whiz©. In fact, the Better Homes and Gardens Cookbook version suggests making Welsh Rarebit with “grated American cheese, or nippy, spreadable cheese.”  Guess they were avoiding brand names. 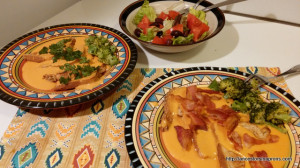 I am certain that mother would have used condensed tomato soup from Campbell's.  I used an organic, low-salt tomato soup in a carton from Sprouts grocery store.  When I make this recipe with my own twists, I will whirl fresh diced tomatoes or good quality canned diced tomatoes in the blender with a little cream.