When I served up creamed chicken chunks over toast, Ken remarked “This is old style–you used the leftover chicken from last night.”

As I sprinkled the fresh parsley over the top, I thought about the dried parsley in a can that Grandma Vera and my mother would have used. I still fall back on canned when my parsley plants aren’t enough, but fresh tastes so much better. 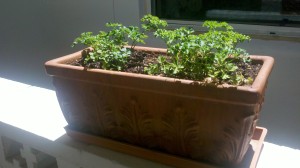 But Ken was right. I had baked the chicken with Italian seasonings yesterday. Today I chopped up the chicken, made a white sauce (call it Bechamel if you want to sound fancy French–it’s the same thing) and mixed in some frozen peas to cook in the sauce.

I sprinkled parsley snipped from a pot I keep growing year round for a bit of color on top. I thought as I did so that Grandma and mother would have used the slightly bitter-tasting dried parsley from a can. Since the chicken was already seasoned with Italian flavoring, it didn’t need anything else.

But “old style”?  Is it out of fashion to use leftovers as the base for a meal?  Of course I don’t see it that way, since it is the way I think about meal planning.  First question–what is in the fridge that I can use tonight? 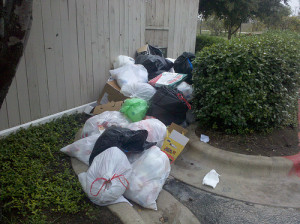 According to a story on NPR, 40% of the food grown or produced in the United States gets thrown away. That is $165 billion worth of food each year uneaten. BILLION. And the amount of wasted food increases every year. So what can we do to get turn back the clock? Read the story at Lettuce Eat Kale for practical tips, and here are a couple more.

What would Grandma have done with leftover food? Besides making cooked foods into a pot pie or casserole, she’d have fed the wilted lettuce to the chickens or chopped it up  to work into soil in the garden. Cold rice became rice pudding with raisins. Bruised apples would make her delicious cooked apple slices.

I admit, I do not use leftovers because I am thinking about global issues. I use them because I’m cheap. But I also hate waste.  People who survived the Great Depression  of the 30s, followed by a World War that demanded real sacrifice (that would be my parents and grandparents), automatically saved, reused, stretched everything.Their children (that would be me) tended  to inherit frugality.

You can find a
recipe for basic white sauce and a way to turn it into cheese sauce at Betty Crocker Web site.  (Hint—turn it into cheese sauce by adding a handful of grated cheese after the sauce comes together.) In my opinion, white sauce is one of the first things that everyone who pokes their head in a kitchen should learn to make. And it surely helps when you have leftovers.