Wouldn’t it be nice if every ancestor we researched had been investigated by a meticulous scholar, and written about in an exciting and readable book?  Definitely too much to ask for in most cases–but in the case of the Bent brothers and Bent’s Fort, we can read a close-up of their lives in a book. 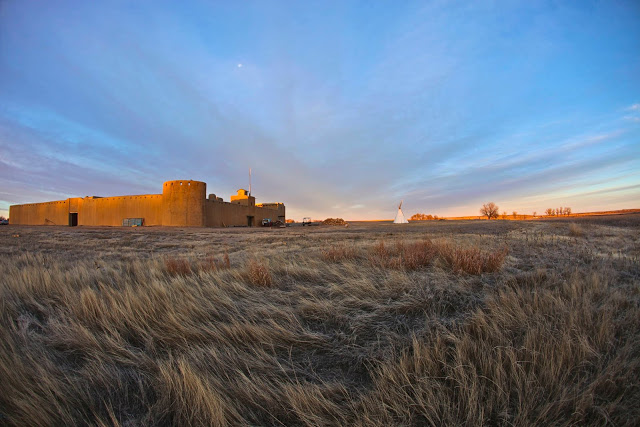 During the Mexican War, the fort served as a base for the troops of American General Kearney. General Kearney  appointed Charles Bent as Governor of New Mexico after the Mexican War. He served from September 1846 until soldiers of the Pueblo uprising killed him in January 1847. (For those keeping track, Charles is the 4x great-grandchild of John Bent through Peter Bent. That makes Charles my 5th Cousin, 4x removed.)

A Closer Look at Distant Relatives

That reference was enough to make me curious to get a look closer at the lives of Charles Bent and that “brother”, which it turns out included three brothers and a sister and the children of all the above.

After reading all about the place, in David Lavender’s book, Bent’s Fort. I also would like to get a close-up view of Bent’s Old Fort.  [Picture from The Boomer Culture.com]The reproduction  that is pictured above now stands as a National Historic site. It’s Colorado location, just north of New Mexico, would fall within the range of a reasonable road trip from my home in Arizona.

Others besides Historian David Lavender have written about the Bent brothers, but none as thoroughly and in such depth.  His book, a close-up not just of the Bent brothers–mainly Charles, William, George, and Robert focuses on the second son, William a bit more than Charles, but only because Charles life was cut short.  We also hear the fascinating stories of Williams half-Cheyenne sons, also named Charles, George and Robert, who to varying degrees “went native” in the bloody post Civil War period when Western Indians fought in their last gasp attempts to retain their land and way of life.

Charles Bent’s first ventures west of St. Louis coincided with the enormous fur trade when beaver skins drew hunters and trappers–the rough mountain men and canny merchants–into uncharted territory.  Without realizing it, they were preparing the way for an influx of settlers and farmers who would follow the roads they developed and weave through the mountain passes they discovered and radically change the very idea of the United States.

This map shows the history in capsule form.

Soon after Charles started working in the fur trade, he decided to become an independent trader. His younger brother joined him on the westward treks from St. Louis to the territory still ruled by Spain, and called New Mexico.  That territory include most of today’s New Mexico, Arizona, Colorado and a little Texas and Kansas, too.  But the traders, including the Bent brothers, were not only dealing with mostly roadless wilderness, and Indians who were hostile one day and wanting to trade the next, but they were also dealing with a foreign government if they proceeded into New Mexico.

William oversaw the building of Bent’s Fort and they settled there with surrounding Indians–mostly Cheyenne–to selling goods. The Bent’s kept expanding their business–Taos, Santa Fe, other trading post/forts, and constantly changing political situations.

Through this book, I learned about a slice of American history in the early 19th century that somehow had escaped me.  As Beavers became extinct and Beaver hats were no longer fashionable, the emphasis switched to buffalo skins.  Methods of transportation shifted from boat to foot and mule, to wagons pulled by mules, to wagons pulled by oxen, and eventually the railroads moved in about the time that the buffaloes disappeared. And Bent’s Fort, under the management of the Bent brothers, adapted to the changes.

The Conclusion for the Bents

The outcome for my relative, Charles Bent, was not so good.  After long years of trying to work fairly with the Indians and the governments of the United States and Mexico, he was made the first Territorial Governor of the newly American New Mexico.   It was a brutal time, medieval in the execution of “justice” and revenge on all sides.A few weeks later, Taos Pueblo men angered that some of their own were imprisoned, attacked Charles’ home in Taos. Although his wife and children escaped, Charles was brutally murdered.

William also had worked so well with Indians that no less than Kit Carson declared him the man who knows the Indians better than anyone.  Nevertheless, the U.S. government dragged its feet on a peaceful settlement with the Indians that William proposed.  The Army had already taken advantage of his good will by camping at the fort without paying rent, and when they proposed buying the fort, he burned it down, moved upstream and built a new, smaller trading home.

William tried to civilize his children, but the book shows that  sending them to St. Louis for their education wound up having little effect on two half-breed young men. His daughter who married a trader, also wound up living with Indians, and the results for the children were devastating.  Except for his son George, who lived to dictate his memories of the stories that came from Bent’s Fort.  Those memories fuel much of the book by Lavender, although he disproves many of the details of George’s family legends.

Many of the names of traders and soldiers who passed through the Bent territory were familiar to me. You’ve heard of Kit Carson and perhaps of Jedidiah Smith or Jim Bridger and  General Kearney. All these passed through Bent’s Fort from time to time. But that just scratches the surface of the men (mostly men) whose stories we hear.  Perhaps some of your ancestors were there, too?

If you want to learn about the beginning of the Mexican war that finally made the United States an ocean-to ocean country; if you are curious about the lives and wars of the Native Americans in the west; if you had ancestors who joined the great western migration–you will learn much from Bent’s Fort.

For a guide to all the stories I have written about the Bents, go here.