There is hardly a soldier in this army but what would rather give them [The Confederate States] their independence than stay any longer.

Grant’s Army, including  the 16th O.V.I. has made camp, since E’s last Civil War letter, moving down river from Arkansas Post. On January 20, they camp at Young’s Point, Louisiana, about three miles above Vicksburg. 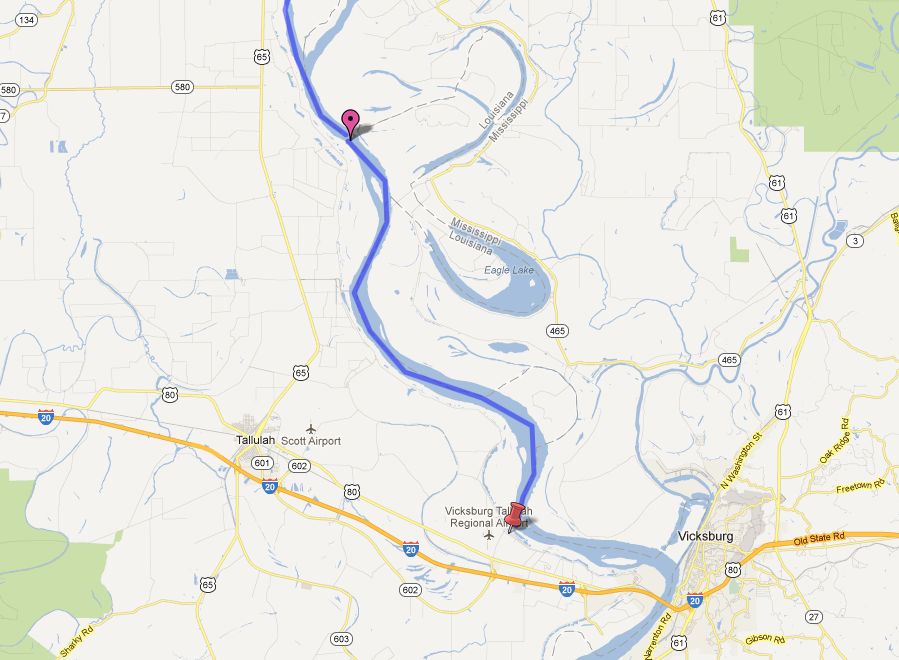 Union troops move down the river to Youngs Point LA. Map from the Michael Woods Website for 16th O.V.I.

It is hard to fault Erasmus for being discouraged. This “Long Encampment”, which is to last 45 days, straggles along the river on levees and ground made deep with mud from nearly constant rain. The weather has turned cold. The only escape from camp is working at digging muck to build “Grant’s Canal”, or occasional forays dreamed up by General Grant to find a “back door” to Vicksburg. Sporadic bombardment from the Confederates roar across the river with their noisy “Whistling Dick” . Replies from the heavy Parrott guns mounted on flat boats. their firing lighting up the night sky. Add to the smell of smoke, sweat and mildew, the stink of the hundreds of mules used to transport things up and down the slopes, most dying from the effort.

In this Civil War letter, addressed to “Dear Wife,” Erasmus alternates his thoughts of home with political rants and doubts about the decisions being made regarding the war.

Although Erasmus has just received four letters from home, he has a political conspiracy theory about the mail, and makes it know that The Emancipation Proclamation, that went into force on January 1, 1863, is not universally approved.

It was a long time since I had got a letter.  I guess our letters are kept from us or at least a great many are.  We cannot get one Democrat paper to the regiment and we get that lieing (sic) Holmes County Republican regular.  It spoke of the joys and satisfaction old Abe’s proclamation received in the army.   There never was such a cursed dissatisfaction in the army about anything as is about that.  It is the Republican postmasters that stops the papers and letters from us.

This sentiment points back to the 150-year-old argument about the purpose of the Civil War.  Erasmus has consistently spoken in favor of keeping the Union together, but he does not believe he is fighting to free the slaves. In fact, his language and attitude reflects a strong prejudice against blacks (and liberal use of the “n” word).

As for “Republican postmasters” it is true that postmasters were eagerly sought political appointments.  While I doubt that postmasters would actually hold back mail, no doubt the Postal Service was censoring mail, but mostly from the Union to the Confederate states. The more pertinent question here, I think, is how did Erasmus get away with his attacks on the government and the army if someone was censoring him?

On January 29th, Grant arrived to personally get the troops ready for the assault on Vicksburg. See Grant’s thinking on the preparations for taking Vicksburg.

Erasmus is not impressed with the idea of digging a canal.

I think Lincoln would do well to send some old crazy woman down to oversee this great expedition.  It would make any old woman laugh to see the great canal they are digging.  It just puts me in mind of little boys play.  If they had anybody to oversee that knew anything they could had it ready to run boats through by this time and saving any more fighting at Vicksburg.

Erasmus is thoroughly sick of seeing illness and death, although he never complains about personally being affected. He must have had that Iron constitution, when he says “I don’t know how long we will stay here but not long I hope for a constitution of steel could not stand this long.”

Our army will soon run down for it is alarming to see the deaths that occur daily.  This is a flat swampy country, very muddy and we are miserably fed….If we stay here until warm weather they will die like old sheep….If this nation can stand this all it has a stronger backbone than I think it has.  I just want to see if the people of Ohio will stand another draft or not. Any man that would volunteer or go drafted now ought to be shot the very day he goes.

Wolbach’s account agrees about the health of the men.

The sick list of many regiments grew alarmingly, and the death rate was a matter of seriousness…The number of deaths in the 16th was small compared to the number under medical treatment.

As usual, Wolbach, twenty years after the fact, has a somewhat more sanguine view of affairs than Erasmus. He points out that those lower down the slope plus the work crews have beautiful views of Vicksburg. And he says:

“It is curious that amid circumstances that look dismal when viewed in retrospection, the majority felt little concern and even enjoyed themselves.”

Some “boys” even built boats out of scrap material and caught fish in the river. However he also mentions desertions and an attempted suicide.

Both Wolbach and Erasmus refer to Cpl. Thomas Phillips of Co. B, who disappeared on January 12 while they were still on the White River in Arkansas.  Wolbach says that he went west and became a hunter and trapper.  Erasmus says, at the end of his letter:

We heard from T. Phillips the other day.   He was at Memphis and is likely at home now and I think he knows enough to stay there.

Erasmus is convinced that the Union is losing the war, and thinks they might as well just give the South their independence and get it over with. As in the last letter, he is still tempted by dissertion, but ever logical, he weighs the pros and cons.

Though I am as much opposed to a dissolution of the Union as any other man I will bet all I am worth, it will be done before we have peace…Oh I wish the strong war men of the north had to stand in our place, they would soon be like us, be in favor of peace…I would like to get out of this honorable but which would be the most honorable, to fight in this war or throw my gun down and go home is the question. I know which the most of the boys will do if they was paid off and was where they could get home, but I believe they are afraid to pay them off just on account of that, but it would be hard to get away from here without giving oneself up to the enemy.

While Wolbach, in Camp and Field refers to the back-breaking work of the “contraband”, the term used for escaped slaves, Erasmus, predictably, sees them differently.

We have thousands of old helpless negroes hanging around the army being fed and clothed by the government and not benefiting us one cent.  That’s the way the war is carried on.

The second half of his letter turns to affairs at home.  He has learned of the death of Ephraim Cellars since his last letter, and he sympathizes with the family, particularly since Ephraim was the only son in a family of daughters. This death only compounds his despondency. Further illustrating his attitude toward the war and blacks, Erasmus says

It seems too hard for them to lose him in such a wicked war as this but it can’t be helped now for it is too late but I have this to say let no more come for we have enough out to lose now and the war will never end as long as a man will fight for the n_______s.

The Union soldiers still have not been paid–going on seven months now–and nevertheless suttlers are charging extortionate prices–30¢ a pound for cheese; 30¢ for dried apples; boots from $6 to $20; and a can of peaches for $1.50.

Oh, I often dream I am at home getting something good to eat, just anything exept fat pork and crackers would be so good.  I want you to save me a can of peaches and all I ask is to get home to eat them

After saying, as he as before, “I want you to get along the best you can,” and he is hoping for peace and that he can get home to his family,” he ends his letter abruptly.

It is plum dark, good-bye.

Oh, it is so sad to hear him yearn for peaches, and so eerie for him to end this dark letter with this brief farewell.

See the prior letter, #7, Civil War Deserters, is here.

The following letter, #9, In the Dark Woods of the Mississippi, is here.