[NOTE: Don’t miss the update to information on Joseph Kaser, added in February 2016. The additional post includes information about his will.]

Joseph Kaser, my 3x great grandfather, is the American patriarch of that extended Kaser family that we traced last week when I talked about his son,  George Kaser, moving from eastern Pennsylvania to Ohio.  This Joseph was the first of his Kaser family to be born in the United States.

Joseph was born on October 8, 1776, just three months after the United States declared independence from Great Britain. He died on Christmas day in 1842.

I like to find the story in my ancestors’ lives, but except for his interesting birth year and death date,  Joseph’s story is eluding me. So this is not a story. It is a collection of what I know so far.

The evidence for what I think I know about him is scanty, mostly coming from that pesky “Green Book” that I have referenced before–a Kaser Family genealogy that lacks evidence of its “facts.”  There are copious references to a Joseph Kaser in the church records of the Zionsville, Pennsylvania Lutheran Reform Church–mostly as the father of the baptized child. However, so far I have only seen the index, so don’t have enough information to swear that it is the Joseph we are looking for.

And there is a tombstone in the old cemetery of the Zion German Reformed Church (Now the Zion United Church of Christ)  at New Bedford, Coshocton Ohio.  The inscription would indicate his birthday was October 8, 1776, the year agreeing with the father of George Kaser according to the “Green Book.”

The same source (Green Book) lists his children, and many (at least the males) appear on census reports living close together, evidence that they are indeed members of his family.  And some of the names of those children show up on the Zionsville Reformed Church records with birth and baptism records.  But for some of the children, I have not discovered even that scant amount of evidence.

And I am totally at sea as to who his parents were. There are two possibilities, so I may not be writing about that for a while.

If the Green Book (G.B.) is correct, Joseph married Elizabeth Stahler,[ UPDATE 2018:  I now doubt that Elizabeth’s maiden name is Stahler, and am working on finding out who she really was.] probably about 1798, as their first child, George Kaser, was born in February 1800. The Green Book says that they couple had nine children, all born in Pennsylvania. It seems that the children moved with them to Ohio by 1824 and all but three stayed in the area of Clark Ohio. Here’s why I’m not jumping to conclusions–the sources I have for each child include sometimes church records from Pennsylvania, Find a Grave or New Bedford cemetery records, and a few census reports–or the Green Book. [Note: in 2021, I found more records and am writing about each of Joseph’s children, my great-great aunts and uncles.]

In addition to these nine children, the Green Book lists a ‘Tom’ with unknown birth date and a child whose name and birth date are unknown.  It is possible these could be infant deaths, but again, I have no proof.

I believe the image below this is the correct Joseph on the 1840 census in German Township, Holmes County. I think of these early census reports as the “chicken scratch” censuses.  Even though the census reports before 1850 list by name only the head of household, and that complicates life for the researcher, a little detective work indicates that this George Kaiser and the nearby Joseph Kaisers are George Kaser, his son Joseph and his father Joseph. The columns represent ages 0-5;6-10;11-15;16-20;21-30;31-40;41-50;51-60;61-70;71-80;81-90;91-100;100-upwards. The first half of the page counts males the second half females. 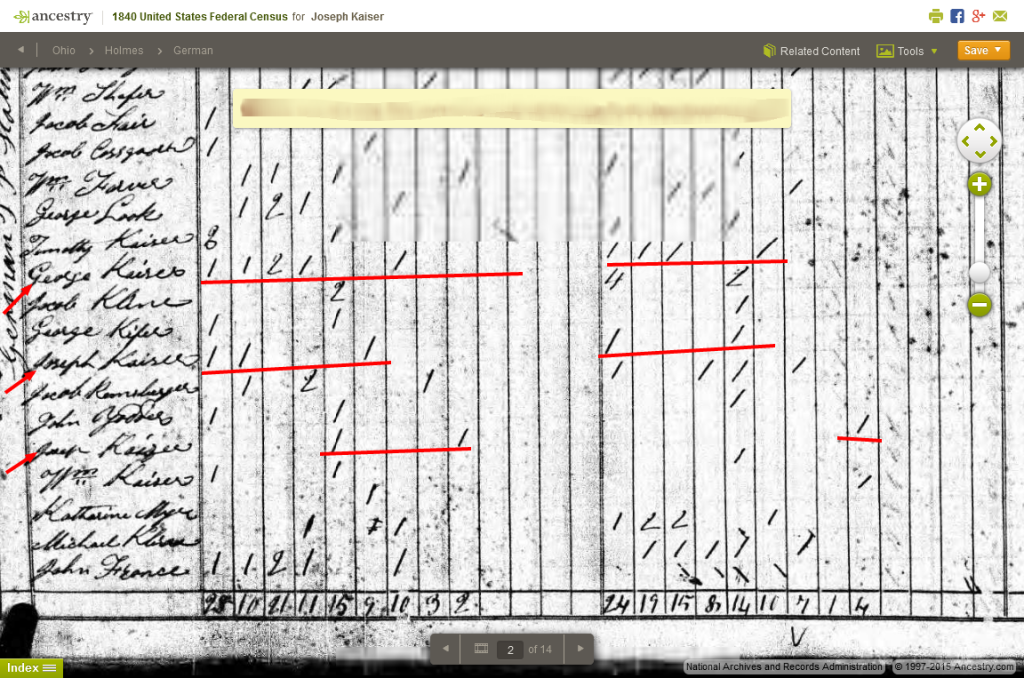 The bottom Joseph Kaser shows a male (left half of the page) of between 60 and 70 and a female of the same age.  That matches Joseph and his wife Elizabeth.  The second male is between 20 and 29.  Sons George, Joseph, Timothy and William are all accounted for on this same census.  Andrew (or Anthony) would be thirty or over.  That leaves Nathan, who would have been 26 years old.  From other data, I know that Nathan lived at home and did not marry until in his 30s, so I conclude that the third person in “grandpa” Joseph’s household is his son Nathan. [Note: September 2021–Nathan was living with brother William in 1870 I’m Indiana].

It is possible that this Joseph is also listed on the 1830 census in the same location, but the chicken scratches are a bit more difficult to convert into real family members in that census, so I’m holding off on using that.

If I’m tracking the correct Joseph Kaser, born in 1776, then this must be his tombstone in the Zion Reform Church in New Bedford, Ohio (Now Zion U.C.C.). 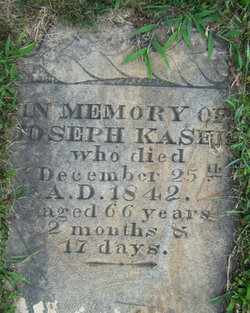 I am hoping that more cousins may see this and may be able to add more definitive information.